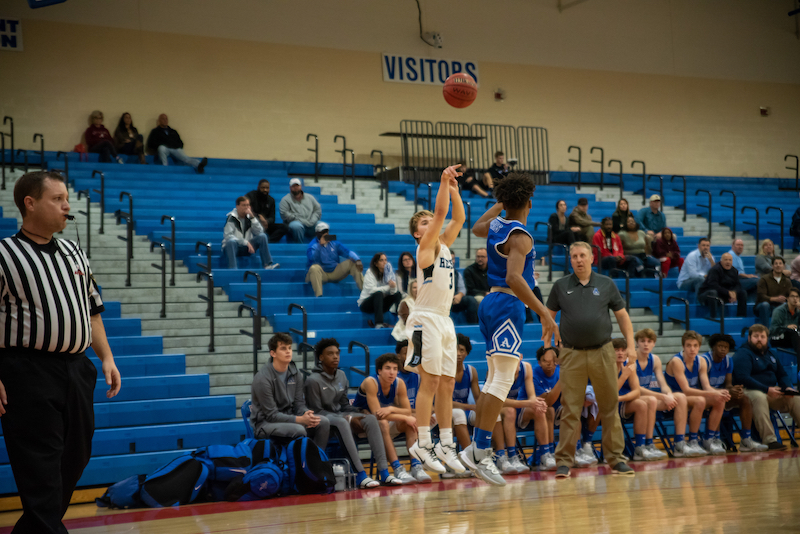 Helena's Caden Pierce (3) helped lead Helena to a runner-up finish in the Sandestin Beach Blowout tournament and was named to the All-Tournament team. (Reporter Photo/Keith McCoy)

DESTIN, Fla. – The Helena Huskies varsity basketball team used the Christmas holiday to get better as a team and played several quality opponents from both in state and out of state, as they competed in the 25th annual Hilton Sandestin Beach Blowout Dec. 27-31 in Destin, Florida.

The Huskies played extremely well and came up just short of taking the tournament title as they finished as the runner-up in the 16-team tournament.

Below are recaps of each game and how Helena navigated its way to the championship game:

In game one of the tournament, Helena faced a tough challenge against William Blount High School of Tennessee, but it was the dynamic duo of senior guards Daunte Cave and Caden Pierce who carried the Huskies to a close 68-63 win.

Pierce and Cave accounted for 49 of Helena’s 68 points scored as Pierce led all scorers with 25 points and Cave was not far behind finishing with 24 points. Pierce also knocked down five 3-pointers in the game.

Helena held a comfortable 38-24 halftime lead but William Blount came out in the third quarter and outscored the Huskies 24-12 to cut the Huskies’ lead to 50-48 entering the final quarter.

Cave and Pierce both scored eight points in the final period and the Huskies got help from Andrew Fortson, who also finished in double figures with 11 points to secure the five-point win.

In game two, Helena took on Class 4A White Plains of Anniston and used solid defense and balanced scoring to take down the Wildcats 55-45 to start the tournament 2-0.

Helena had three scorers finish in double-figures as Cave led the Huskies with 15 points, Pierce chipped in with 14 points and Brody Moss added 13 points in the win. In all, Helena had eight players record at least one point.

Defensively, Helena held White Plains to 10 points or less in three of four quarters and took a 30-15 lead into halftime.

The Wildcats most successful quarter came in the third period where they scored 20 points behind Jacob Wheeler’s two 3-pointers. He finished as the leading scorer for White Plains with 13 points.

Although the Huskies won by 10, they had opportunities to stretch the lead but finished just 15-for-26 at the free throw line.

In the semifinals, Helena took on the Oneonta Redskins with a trip to the championship on the line.

Using a strong second half, the Huskies outscored Oneonta 35-24 in the final two quarters to pull away for the 14-point win.

In the first half, Oneonta used hot shooting from beyond the three-point arc. The Redskins knocked down six 3-pointers in the first two quarters but Helena countered by scoring all its points from two-point field goals or from the foul line to take a slim 31-28 halftime lead.

Helena’s scoring once again went through Pierce and Cave as Pierce led all scorers with 23 points and Cave added 16 points.

Although Oneonta finished the game knocking down 12 3-pointers, it wasn’t enough to keep them in the game as they shot just 2-for-5 from the foul line and made just seven two-point field goals.

On the flipside, Helena made 33 trips to the foul line and converted 23 shots good for 70 percent.

In the championship game, Helena faced a tough unbeaten Dickson County team from Tennessee and faltered in the second half being outscored 27-18 to fall 51-43 to finish as the tournament runner-up on Dec. 31.

For the first time in the tournament, Dickson County held Pierce to single digits scoring as he finished the game with eight points.

The first half was a back-and-forth battle as Helena knocked down seven 3-pointers to take a 25-24 halftime lead. Kellen Watkins led the way with three 3-pointers, Moss had two and Pierce and Mason Fitts each added a 3-point basket.

In the second half, the Huskies couldn’t find the same success scoring from beyond the arc, as Pierce was the lone player to hit a 3-pointer for Helena in the second half.

Despite the lack of scoring, Helena still led Dickson County 38-35 heading to the final quarter.

In the fourth quarter, Helena was held to just five points and went 1-for-6 from the foul line as Dickson County took advantage of its opportunities at the foul line converting 4-of-5 free throws in the quarter and 10-of-16 for the game. The Huskies finished just 38 percent from the free throw line in the game going 5-of-13.

For Dickson County, Jaden Davis led all scorers with 17 points and DJ Stacy was a big factor, scoring all seven of his points in the second half.

Following the tournament, both Pierce and Cave were named to the All-Tournament team.

Region play now looms for Helena, as the Huskies will take on Calera on Jan. 7 and Pelham on Jan. 10.