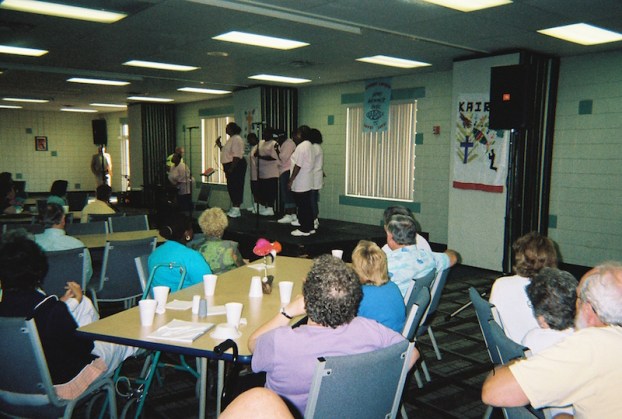 Kairos Outside, an arm of Kairos Prison Ministry, is a program specifically designed for women who have a spouse, relative or friend in prison. (Contributed)

‘There is hope:’ Ministry supports people touched by incarceration

COLUMBIANA – Deb Timmons reads a list of eye-opening numbers that illustrate the impact of incarceration on American families.

More than 2 million men and women in the United States are incarcerated. One in two adults (about 113 million) has had an immediate family member in jail or prison for at least one night. Seventy percent of incarcerated youth have one or more parents who also have been incarcerated. As Timmons ticks off each statistic, the bigger picture is clear: Incarceration is as far-reaching as it is detrimental to families in Alabama, and beyond.

But Timmons, the wife of Columbiana United Methodist Church Pastor Buster Timmons, does not read the numbers to dwell on negativity. She reads them to emphasize the need for Kairos Prison Ministry, an international ministry in which she has been involved for a decade.

“Our whole purpose is to share the transforming love and forgiveness of Jesus Christ, to impact the lives of incarcerated citizens,” Deb Timmons said. “Whether they come home or not, all people are worthy of God’s forgiveness and salvation if they truly repent.”

Timmons primarily serves in Kairos Outside, a ministry program specifically for women who have a spouse, relative or friend in prison.

The program hosts the Kairos Outside Weekend, a two-and-a-half-day program based on a series of talks by volunteers designed to address the pain of enduring separation from the one inside and the judgment of others from their community, according to Kairosprisonministry.org.

Kairos is a Christian program, but no religious affiliation is required for participants, or “guests.” Any 20-year-old or older female whose life has been impacted by the incarceration of a relative—or a woman who was unable to attend the Kairos Inside program while she was in prison—is eligible to attend Kairos Outside.

“We tell them what God is doing in our lives and what God offers them,” Timmons said. “We tell them up front we’re not going to ask them to change. We accept them unconditionally, just like God does. If they choose to make a change, we’re there to support them. Their incarceration impact doesn’t have to be current; it’s if they have ever been impacted.”

Each Kairos Outside weekend is conducted by a volunteer group called a “team” and includes talks on various topics, such as isolation, forgiveness and relationships.

The weekends are funded completely by donations, making them free for guests and volunteers.

The average team size is 45 people, and each retreat hosts about 25 guests, Timmons said.

The weekends give women an opportunity to connect with others who have had similar experiences and to build their self-esteem, all in a two-day span.

“It’s just such a beautiful thing to see,” Timmons said. “It is like having a front-row seat to a miracle – the joy that’s been restored in them, the burden that’s been lifted off of them. There is hope.”

Timmons currently serves as a national trainer for Kairos Outside future leaders.

In addition to weekend leaders, each state has a Kairos chapter committee and advisory councils.

“All people involved are volunteers, and all kinds of people from every walk of life serve in these positions,” Timmons said, adding that Kairos, which is headquartered in DeBary, Florida, has only about a dozen paid employees. “This is a service-rich, volunteer-rich program.”

The word “kairos” is a Greek term that translates to “God’s Special Time.”

The ministry began in 1976 with a three-day short course in Christianity called “Cursillo in Prison” inside Union Correctional Institution at Raiford, Florida. It was later modified and renamed Kairos, and in 1979, the first Kairos Prison Ministry weekend was held.

“Our whole ministry started with taking Christ inside the prison,” Timmons said. “This is an international ministry, nonprofit and completely donation operated.”

Female clergy are needed to interface with Kairos Outside teams and guests during weekend retreats, Timmons said.

Volunteers are always needed to continue the mission of Kairos. Anyone interested in volunteering can visit Mykairos.org.

More information about all facets of Kairos Prison Ministry is available at Kairosprisonministry.org.

By SCOTT MIMS / Staff Writer Anthony Boyd served 10 years as an infantryman in the U.S. Army, including two... read more