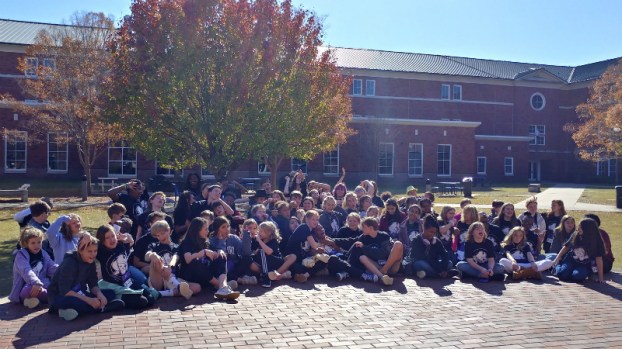 The first Jaganeer ThesFest brought together students from Hoover schools with an interest in drama. (CONTRIBUTED)

“We (Rowe, Delle Kincaid at Simmons Middle School and Ashley Bishop at Bumpus Middle School) first met in February 2019 for professional development,” Rowe said. “We had some time set aside to brainstorm and all liked the idea of a day for students from all schools with an interest in drama to get together for various workshops.”

And yes, the name is a combination of Jaguars, Buccaneers, Thespian and Festival.

“We split the planning equally and this name came out of that planning,” Rowe said.

More than 80 middle school students from Simmons, Berry and Bumpus attended, including Berry students Mae Elliott and Josiah Toone, who have both appeared in numerous Berry productions.

“I’ve been involved in Berry Drama club for about two years now. The best parts are meeting new people and getting to know them very well and having so many similarities,” Elliott said. “You become closer as a family and you end up loving everyone in there. I really hope it’ll become an annual event.”

Students from both Hoover and Spain Park high schools assisted with various workshops, as did Nancy Malone, theatre director at Hoover, and Dustin Helmer, her contemporary at Spain Park.

Also, Ashley Richardson and Lexi Reeves, both from the local theatre community, brought their skillsets to yoga and makeup, respectively.

Rowe indicated that Jaganeer ThesFest was a huge success and very much expected it to become an annual event.

Students paid a $35 fee which covered lunch, T-shirt, a nurse, the outside instructors and all the workshops.

FROM STAFF REPORTS The University of Montevallo will be able to greatly enhance its counseling services to students, faculty and... read more