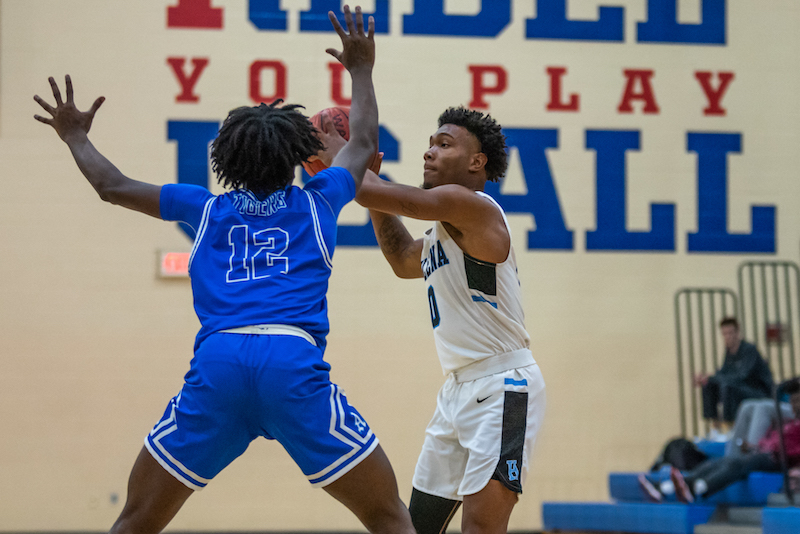 The Helena Huskies got a strong performance from Daunte Cave in an area-opening win, as he also joined the 1,000-point club. (File)

He became just the third player in school history to do so, as the 31-point performance gave him 1,010 in his career and helped the Huskies pick up a 15-point, 68-53 victory over a hot Calera team.

The Eagles (11-5, 0-1) got six points from Duke Chambers, which played a large part in their 14 points in the quarter, while Cave matched that number for the Huskies with six points of his own.

Helena also knocked down two 3-pointers in the opening quarter, which helped keep pace with Calera for a 14-14 tie at the end of the opening period.

With that shift in momentum, Helena was able to take a 30-22 lead into the halftime break, which allowed the Huskies to play with the lead.

Coming out in the second half, that cushion allowed Helena to keep the pressure up but not play as tense.

While that led to a slight lapse in defensive presence, the offensive balance continued to play a key role in the third quarter.

Calera did come out and post 17 points behind strong quarters of seven and six points from Chambers and Paris Whatley, respectively. But the Huskies put up 16 again thanks to seven from Caden Pierce.

With the offense still clicking, Helena held a 46-39 lead heading to the final quarter.

His 10 were part of a 22-point fourth period, as the Huskies also got 3-pointers from Pierce and Kellen Watkins.

Calera was held to just 14 points in the frame, which allowed Helena to pull away for 15-point victory.

Calera was led by 19 points from Chambers, while Whatley added 12 points and Jordan Eggleston 10 points.

The Helena girls also picked up a win over Calera during the night by a final score of 53-41.

The Huskies got a dominant night from Montana Harris, who finished the game with 28 points and five steals, while teammate Kya Gardner posted seven rebounds with a strong defensive performance.