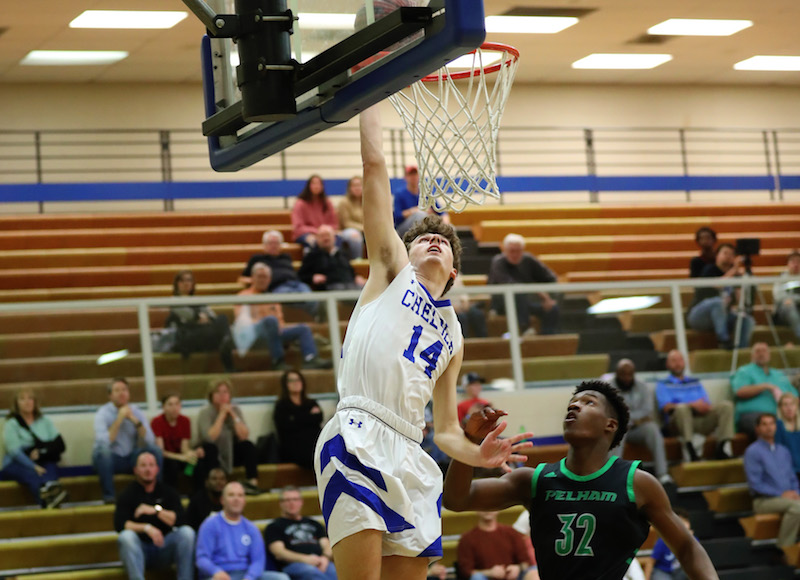 Caleb Moore put together a 22-point performance to lead Chelsea to a 56-41 win over Pelham in its area opener. (For the Reporter/Cari Dean)

CHELSEA – Chelsea senior Caleb Moore continued his stellar play of late and in the biggest game of the season for the Hornets on Tuesday, Jan. 7, when they opened area play against rival Pelham.

Moore put together a double-double performance of 22 points and 10 rebounds to help lift the Hornets to an impressive 56-41 victory on their home floor for a 1-0 start to area play.

The strong night for Moore began in the opening quarter when he showed he was ready to get area play started with the best quarter of any player in the game. He posted 10 points by himself, while Jordan Thomas and K.J. Hall added a combined eight points for 18 first-quarter points for the Hornets.

Blake Floyd did his best to keep the Panthers (10-10, 0-1) in it with eight points himself, but only got three other points from teammates, which put Chelsea in front 18-11 at the end of the first quarter.

The game shifted to a more defensive pace in the second quarter, but Chelsea (10-11, 1-0) got four points apiece from Andrew Messier and Jacob Tierney. Floyd again had a strong quarter himself with five more points, including a 3-4 mark at the free throw line, but beyond that, Pelham was 2-5 at the line and got just four more points.

With a balance struggle for Pelham, Chelsea extended its lead to 30-20 at the halftime break.

Coming out of the halftime break, both teams continued to put an emphasis on defensive play.

That helped the game from becoming too one sided, but Moore’s quarter of eight points offensively helped the Hornets post 10 more points, while Pelham only put up eight points.

That sent the game to the final quarter with Chelsea holding a 40-28 advantage.

In the final quarter of action, Pelham finally seemed to find a rhythm, specifically at the free throw line, as the Panthers hit nine of 10 free throws to post 13 points in the period.

But Chelsea closed out the game with its second best offensive quarter of the game to put the game away. Hall hit two 3-pointers in the quarter, while Bryant Royster and Thomas each had four points in the period to help post 16 points and close out the 15-point victory.

Moore’s performance led the Hornets in the win, but Thomas’ 11 points off the bench and Hall’s nine points were both big in the win as well.

Pelham was led by 17 points from Floyd, while Roy Gonzalez posted seven. The Panthers were down to just eight players in the game, which limited production.