Seventy-five-year-old Donald Relyea would agree with author Robert Heinlein, who said, “A generation which ignores history has no past and no future.”

“History is not being taught the way it used to be,” Relyea said. “It’s important to have a place where people can come and experience things from the past.” 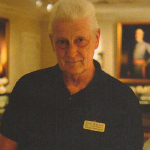 One of those places is the Karl C. Harrison Museum of George Washington in Columbiana. Responsible for the complete operation of the museum, Relyea is a specialist when it comes to the museum’s collection on the first president of the United States.

The museum, which opened nearly four decades ago in 1982, contains more than 1,000 pieces from the Washington family, as well as from the Robert E. Lee lineage (a descendant of Martha Washington).

Relyea, who became curator of the museum in 2012, said he has no intention of quitting the job of his dreams, adding, “What better job can I find?”

In fact, he is so taken with his work at the museum that he works even when he is not being paid as curator.

He maintains all of the financial records and is available to speak to organizations.

His presentations explain what the museum does and why it exists.

“The most enjoyable aspect of my role at the museum is the opportunity to lead tours for senior citizens and school groups,” Relyea said.

For 15 years he participated in the living history event at American Village in Montevallo, in which he portrayed revolutionary soldiers.

Relyea has been the finance chairman at Wilsonville Methodist Church, where he has been a member since 1994.

As host and self-proclaimed “official greeter,” he passes out smiles, along with the service bulletin and reads scripture during each service.

He also serves as waiter at the United Methodist Women’s Annual Fashion Show.

Funds from the fashion show provide scholarships to high school seniors and support the meals to shut-ins program.

Relyea has been the finance chairman for the past 14 years.

The oldest of six children, the Syracuse, New York native is a United States Army veteran who said he served because he “felt an obligation to serve our country.”

Having done so proudly for 27 years, Relyea retired as a Master Sergeant.

He has been married to his spouse, Luz, for 30 years.

Phelps gives back through Civitan Club

By DAISY WASHINGTON / Community Columnist “I have been a ‘working stiff’ all my life and my community service has... read more