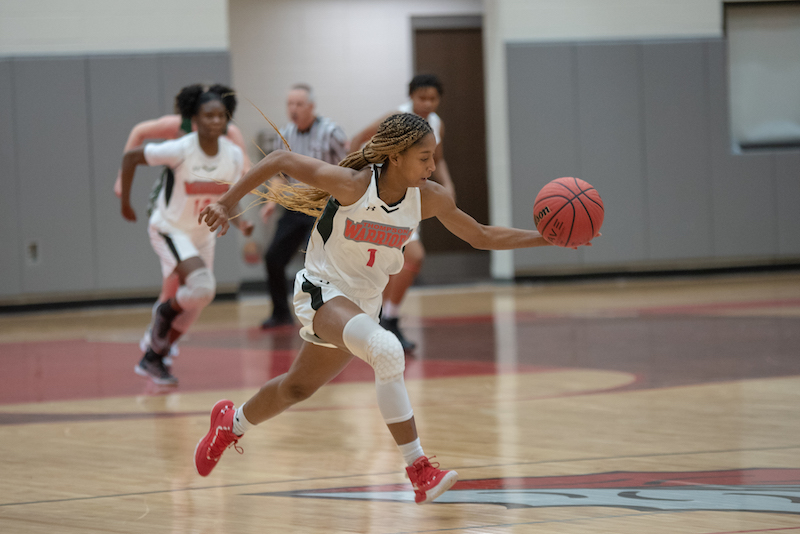 London Wooley, above, came up big in both overtime periods to lead Thompson to a win in its area opener. (File)

ALABASTER – Marty Smith’s Lady Warriors are picking up steam and pulled out a big win to begin area play, as they outlasted the Tuscaloosa County Wildcats in double overtime on Tuesday, Jan. 7 with a 53-51 win.

The victory gets Thompson’s record back to .500 as the team has won three of its last four. Smith praised his team’s effort and will to win.

“The young ladies played hard and they continue to believe in each other,” Smith said. “They believe they’ll make plays in the end on the offensive and defensive sides of the ball.”

Thompson (9-9, 1-0) had one of their best quarters of the season to open the game, as five Warriors scored in the period led by Malaysia Samuel’s five points.

Kaylyn Calvin was spectacular all night for the Wildcats and scored five in the quarter as well, but Thompson led 17-13.

The second quarter trended in the polar opposite direction as both teams struggled from the field. If not for Mackinly Atwood’s two 3-pointers, the two teams would’ve combined for zero field goals in the period.

Alayah King’s lone free throw served as Thompson’s only point in the quarter, as the Wildcats took a 21-18 lead into the locker room.

Neither team’s prospects increased dramatically in the third, as the teams both went on runs, but weren’t able to sustain the momentum.

Thompson went on a 7-2 run to retake the lead, but didn’t score the rest of the quarter, enabling the Wildcats to go on their own 8-0 run to finish the quarter.

With just eight points in the second and third quarters, Thompson needed a spark and they found it in senior London Wooley. Wooley scored five points in the quarter and her teammates crashed the offensive boards with five in the final quarter.

A late 7-2 run gave the Warriors the lead, but a late foul allowed the Wildcats to tie the game at the charity stripe to force overtime.

Thompson milked the first OT period, but down 46-44 late, Wooley came through again for her team. The senior guard drove left and pulled up for a jumper to tie the game, but Kaylyn Calvin quickly drove down the court eluding Thompson’s press and found Shiyah Lewis for the go-ahead layup.

Wooley, however, got the ball at the top of the key with a couple seconds remaining and drilled a shot just inside the three-point line as time expired.

London scored five more in the second overtime and outdueled Calvin, who scored the Wildcats’ only points on a 3-pointer to give Tuscaloosa County its last lead.

But Wooley got it once again at the top of the arc, then drove left and sank a runner in the lane for the game-winner.

Abby Kellogg then came up with a steal on the next possession and dished it to Wooley who was fouled and hit one of two free throws. The Wildcats’ desperation heave as the horn sounded fell well short giving Thompson the win.

“London’s experience down the stretch provided the leadership that we needed in order to pull the game out,” Smith said. “It’s always a good feeling knowing that your point guard has been in major battles before and the moment’s not too big for her.”

Wooley had scored just two points heading into the fourth quarter, but scored 14 points from there, including all nine of her team’s points in both overtimes. Her 16 points led the team, while Samuel finished with 11 points for Thompson.