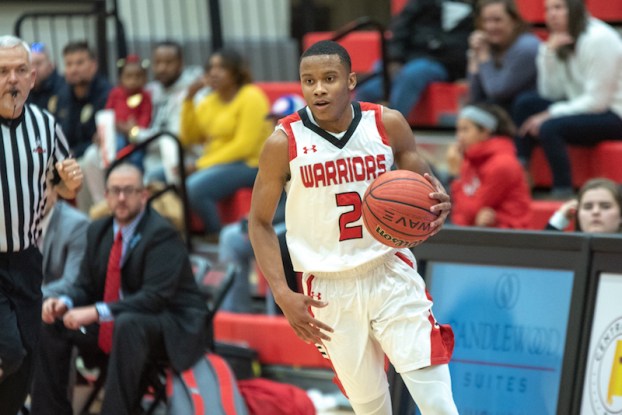 Thompson was able to pull away from Tuscaloosa County on Tuesday, Jan. 7, to pick up a win in its area opener. (File)

Thompson pulls away from Tuscaloosa Co. for area win

ALABASTER – The Thompson Warriors turned a close game into a runaway win after halftime using a big third quarter run and pressure defense to send Tuscaloosa County packing with a 68-40 victory in their first area game on Tuesday, Jan. 7.

“I felt like our press really had a major impact on the game,” Thompson head coach Dru Powell said. “I think we kind of wore them down throwing several different bodies at them and we were able to get several turnovers and easy buckets. Anytime you can get an area win, especially in this area, it’s big for our team.”

The opening quarter was explosive as both teams took turns with the lead. Chaney Johnson led the Warriors with seven, while Kel Leatherwood did the heaving lifting for the Wildcats scoring all 11 of his points in the first half to keep Tuscaloosa County close.

Thompson gave themselves a little breathing room in the second quarter with a 7-0 run that gave the Warriors a 32-23 lead.

All seven of the Warriors’ buckets came from different players, as they closed the half with a 34-27 lead.

The Wildcats started well coming out of the locker room and drew within two points at 40-38, but grinded to an offensive halt thereafter.

Thompson’s full-court press had mixed results until that point, but it didn’t take long for them to take over, forcing six turnovers in the period, including four in a row that led to three triples and a 13-0 run to end the quarter.

Grant Hopkins was a key contributor, as he scored 10 points in what ended up being a 24-0 run that stretched from the third quarter to midway through the fourth.

By the time it was over, Thompson’s lead ballooned to 64-38 with the game well in hand.

The Warriors’ defense was sensational, forcing 12 turnovers in the second half, while allowing just one field goal over the final 12 minutes.

“We’re very balanced, we had 10 different guys score, so it’s a prime example of a complete team win,” Powell said. “All of our guys contributed and that’s always fun to see.”

By SETH HAGAN | Special to the Reporter ALABASTER – Marty Smith’s Lady Warriors are picking up steam and pulled out... read more