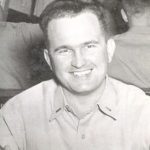 “The American Village is pleased to join the Shelby County Reporter in recognizing John Milton Street, Jr. as Veteran of the Week,” American Village Founder and CEO Tom Walker said. “He is representative of the hundreds of thousands of Alabamians who have risked it all for the sake of our country and its freedom. To all veterans we owe a debt we can never fully repay.”

John Milton Street, Jr. was born in Birmingham in 1922. He graduated from Woodlawn High School in 1942. He attended Auburn University, Georgia Tech and Princeton University. John served his country with honor in the U.S. Navy during the Korean War. Following his admission to Naval Officer Training Corps he was transferred from Naval Reserve and stationed aboard the U.S.S. Estes. After being discharged from military service, he was employed for 44 years with the Bell System, retiring in 1987 from BellSouth. He was married to the former Mary Jane Mullen with whom he had one daughter Kathryn Jane (Street) Logue. He was a man of faith, active at Canterbury Methodist Church, where he was a member of the Board. He loved to hunt, fish and play golf.