See the dates, locations and opponents Helena football will face in 2020 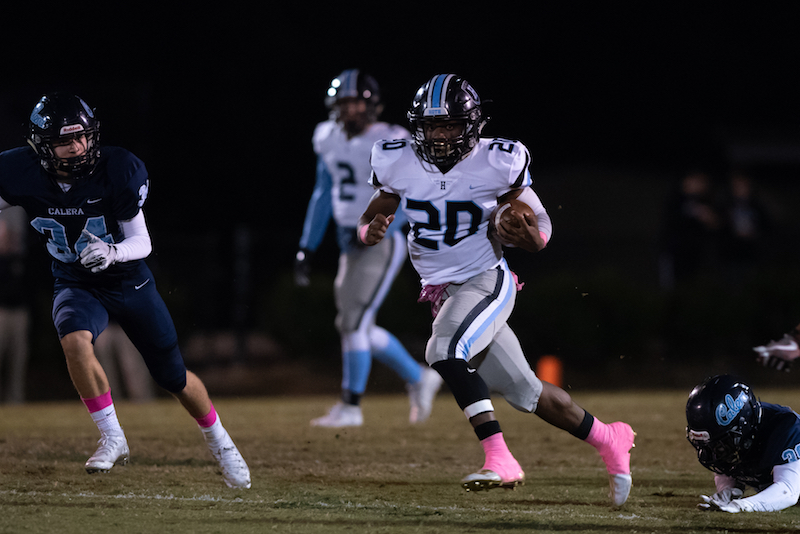 The Helena Huskies varsity football team will see several new teams on its schedule in 2020 after moving to Class 6A Region 3. (File)

HELENA – Fresh off a 9-2 season in 2019 that included a Class 6A Region 5 championship, the Helena Huskies now know what teams they’ll face in 2020 as a shift in regions will make things slightly more interesting this fall.

The Huskies will try to build on the momentum from 2019 as they enter year three under the direction of head coach Richie Busby. Despite a first round exit in the 6A playoffs in 2019, Helena earned its first region championship in school history with a 6-0 record in region play.

After competing in Class 6A Region 5 for two seasons, Helena will now make the move to Class 6A Region 3 after the recent reclassification that will include Pelham, Calera, Benjamin Russell, Chilton County, Stanhope Elmore, Wetumpka and the Huskies in 2020.

Helena will drop six total opponents from 2019 including Hueytown, Homewood, Minor, Southside Gadsden, Carver Birmingham and Jackson-Olin and replace them with new teams in 2020.

Here’s a look at the opponents, dates and locations the Huskies will face in 2020.

Helena will open the season on Aug. 21 at home against Dallas County. The Huskies last faced the Hornets in 2015 while competing at the 5A level where they won 31-7. Dallas County competes in the Class 4A classification where they finished 4-7 in 2019 and lost in the first round of the playoffs.

Up next for Helena kicks off a stretch of three straight road games beginning with Chelsea on Aug. 28. Typically a region game in year’s past, in 2020 this will be a non-region game as the Hornets will stay in Class 6A Region 5. Helena and Chelsea have played two incredible games the last two seasons with the Huskies edging Chelsea 28-21 in 2018 and 31-28 in 2019. After starting 0-4 all-time against Chelsea, Helena has defeated the Hornets the last two seasons.

Following Chelsea, Helena’s first region game will be on the road against Wetumpka on Sept. 4. The Huskies are 0-2 all-time against the Indians, most recently falling 35-14 in 2017. In 2020, Helena will take on a Wetumpka team that is coming off a 6-6 season in 2019 where they fell to Spanish Fort 63-21 in the second round of the 6A playoffs.

Rounding out the road trip will be another region game against Benjamin Russell on Sept. 11. Helena last met Benjamin Russell in 2017 where they fell 38-20. The Wildcats went 5-5 in 2019 and missed the playoffs.

Following the road trip, Helena will come home to take on rival Pelham on Sept. 18, which should have early season implications on the Class 6A Region 3 standings. After starting 0-3 all-time against the Panthers, the Huskies finally flipped momentum in the rivalry by cruising to a 62-20 win over Pelham in 2019. Helena will try to make it two in a row in 2020.

On Sept. 25, Helena will get a break from region play to travel to McCalla to take on the McAdory Yellow Jackets. The Yellow Jackets have been a fixture on the Huskies’ schedule for the last two years as Helena is 1-1 against McAdory after falling in 2018 but getting a 38-14 win in 2019. Helena will go for a second straight win against the Yellow Jackets in 2020.

Kicking off the month of October, Helena will face Chilton County for homecoming on Oct. 2. The Tigers finished 6-5 in 2019 and fell to Pleasant Grove in the first round of the 5A playoffs. Chilton County made the jump from 5A to 6A in 2020 as this will be a region game for both the Tigers and Huskies.

Up next, Helena will travel to take on Calera in a region game on Oct. 9. The Eagles remain in Class 6A Region 3 in 2020 and are familiar with playing the Huskies as this year will mark the third straight season the two teams meet. The Huskies are 3-1 all-time against Calera and defeated the Eagles 21-3 in 2019.

Helena’s final region game of the season will be a home tilt with Stanhope Elmore on Oct. 16. It will be the first meeting in school history for the Huskies and Mustangs as Stanhope Elmore is coming off a 9-3 season in 2019 where they narrowly lost to Park Crossing in the second round of the 6A playoffs.

Following region play, Helena will have a chance to rest up on Oct. 23 with a bye week before rounding out the regular season on Oct. 30.

To finish the season, Helena will take on reigning Class 4A state champion UMS-Wright on senior night. The Bulldogs have won three 4A state championships in a row and last lost a game on Sept. 15, 2017 to Andalusia 27-21 in overtime.

UMS-Wright will make the jump to Class 5A Region 1 in 2020, but no doubt they will be a stiff challenge for Helena to round out the 2020 regular season.

Should Helena make it back to the playoffs in 2020, these are the opponents the Huskies will take on as they look to build off a historic season in 2019. Full schedule listed below. Asterisk denotes region opponent: