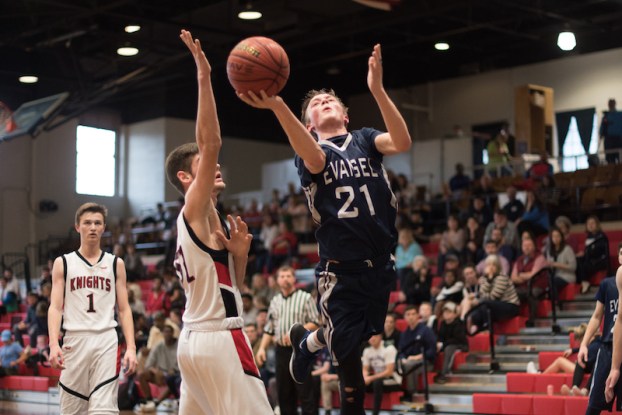 The Evangel Lightning picked up an upset of No. 7 Chambers Academy on Thursday, Jan. 9. (File)

Evangel takes down No. 7 Chambers Academy

ALABASTER – Following four consecutive losses, the Evangel Lightning have bounced back in a big way over the last two games taking down East Central Home School on Tuesday, Jan. 7, and most recently AISA No. 7 Chambers Academy on Thursday, Jan. 9, to improve to 9-6 on the season.

Coming off a state championship in the ACSC last year, the Lightning have shown promise to repeat throughout this season, and the win against Chambers was the next step in that process.

As the No. 7 team in the AISA, Chambers had only lost one game coming into the matchup with Evangel, but the Lightning used a strong second quarter to grab what became an insurmountable lead in a 61-51 victory.

“I really feel like tonight we got over that hump on both ends of the floor,” head coach Hagan Joiner said. “The guys finally looked like a team. I really hope we can use that momentum going forward. These guys have a chance to be special. With 9 seniors on the team I want them to make the most of it.”

Evangel, however, bounced back in the second quarter with its best offensive period of the game behind 20 points, while the defense also played its best quarter of the game, giving up just five points.

That not only allowed the Lightning to take the lead, but allowed them to storm in front for a 32-18 halftime advantage.

Coming out of the break, that upward trend continued for Evangel. The Lightning put up 17 more points on the offensive end and held Chambers to 13 or less for the third consecutive quarter by giving up just 10 more points.

That allowed Evangel to extend its lead to 21 points at 49-28 heading to the final quarter of action.

Chambers made a run in the fourth period, but the deficit was too much to overcome at that point. The Rebels outscored Evangel 23-12 in the frame, but the Lightning held on for the 10-point victory.

Xaveon Smith led Evangel with 19 points and also added three rebounds and three assists. Tyler Henderson was also big thanks to a double-double performance that featured 17 points and 11 rebounds.

Montevallo improves to 4-0 in area play