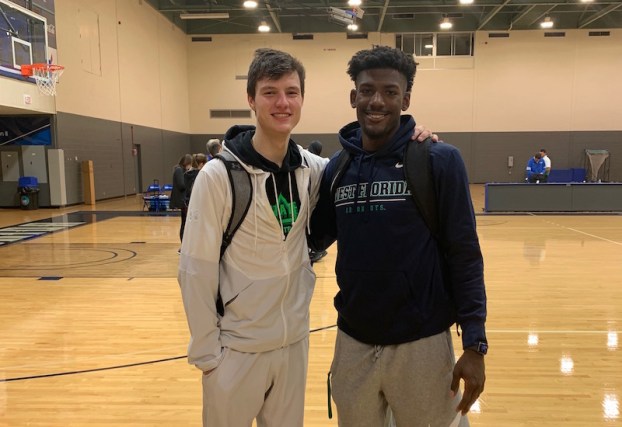 Jon Brown, right, and Austin Laatsch went shot-for-shot in a game against each other at the college level after formerly suiting up together at Helena. (Contributed)

PENSACOLA – Austin Laatsch and Jon Brown used to share the floor donning the white, black and blue uniforms of the Helena Huskies, and on Thursday, Jan. 9, the two shared the floor once more, but this time in odd circumstances.

Laatsch stood on one side donning green and white and Brown on the other side in white and blue, the two former Huskies stepped on the floor to compete against one another and back-and-forth shots ensued.

With Laatsch leading Delta State as a freshman and Brown leading West Florida as a redshirt sophomore, the two players combined for 42 points in a thrilling 68-67 victory for Brown’s Argonaut’s.

The game itself saw West Florida with a 10-point lead with three minutes to play, but Delta State then got a 3-pointer from Laatsch, which sparked a 10-0 run to tie the game at 67-67 over the final minutes, including five total points from Laatsch.

After tying the contest, however, West Florida got the final shot of the game, and as time expired, Tarik McKelphin earned a spot at the free throw line with no time remaining. He drained the first free throw to help the Argonauts claim a 68-67 victory.

But away from the final score, the matchup between the two former Helena standouts was special as well.

Brown finished as the team’s leading scorer with 20 points in the win, while also finishing tied for second on the team in rebounds with seven. He went 5-15 from the floor and 1-2 from beyond the arc, but most impressively, he knocked down nine of his 10 free throws for a 90-percent mark, while also logging a game-high 40 minutes.

Laatsch’s performance was also one worth remembering, as the two players threw jabs back and forth at each other.

He put up a game-high 22 points in the tough one-point loss thanks to a 7-12 mark from the floor and an impressive 6-11 mark from beyond the arc. He also went 2-2 from the free throw line, had two rebounds and played in 35 minutes of action.

Both players were former stars at Helena, while Laatsch was also a major playmaker at Spain Park for his senior season after dad Chris Laatsch took over the head coaching job with the Jaguars.

See the dates, locations and opponents Helena football will face in 2020