Montevallo improves to 4-0 in area play 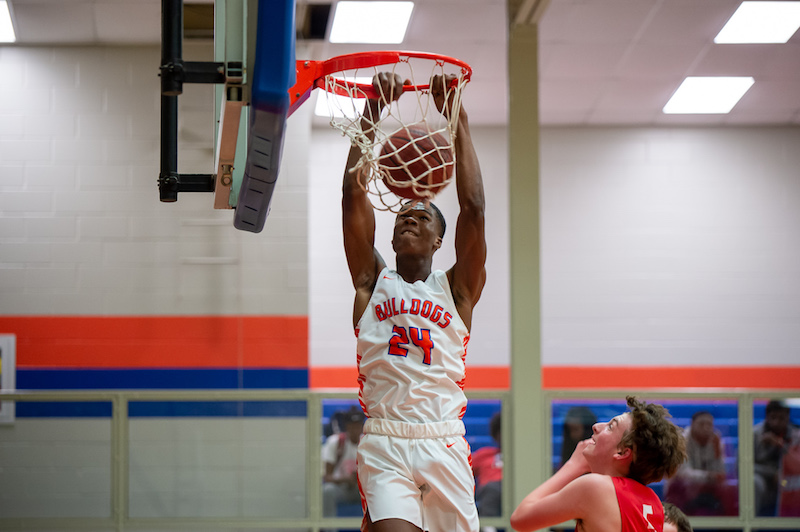 The Montevallo Bulldogs won their sixth consecutive game and improved to 4-0 in area play with a 75-34 win over Leeds on Jan. 9. (File)

MONTEVALLO – The Montevallo Bulldogs extended their win streak to six games on Thursday, Jan. 9, when they took down area foe Leeds 75-34 to pick up their fourth area victory of the season.

The Bulldogs have now won eight of their last nine games and sit at a perfect 4-0 atop Class 4A, Area 8 standings.

A big reason for that success has been because of a talented offense, but the presence defensively is what sparked Montevallo’s offense against the Greenwave.

Knowing they’re a team that plays well in the fast break, the Bulldogs used the full court press from the start to force turnovers, which led to several fast break scoring opportunities and a dominant scoring first quarter of 26 points.

And with the strong defensive effort, Montevallo was able to limit Leeds to just eight points in a quarter that helped the Bulldogs build an already insurmountable lead.

The second quarter didn’t see as strong of an offensive quarter, but still saw Montevallo outscore the Greenwave 15-10 to take a 23-point lead into the break.

During the half, head coach Greg Dickinson and his team made the necessary adjustments to find their offensive prowess again, as the Bulldogs posted a flawless 30-point quarter.

They outscored Leeds by 19 points in the period to take a dominant 71-29 lead into the final frame.

With that 42-point advantage, a running clock was used in the final eight minutes of action, which limited offensive production. Leeds outscored Montevallo 5-4 in the frame, which led to the final score of 75-34.