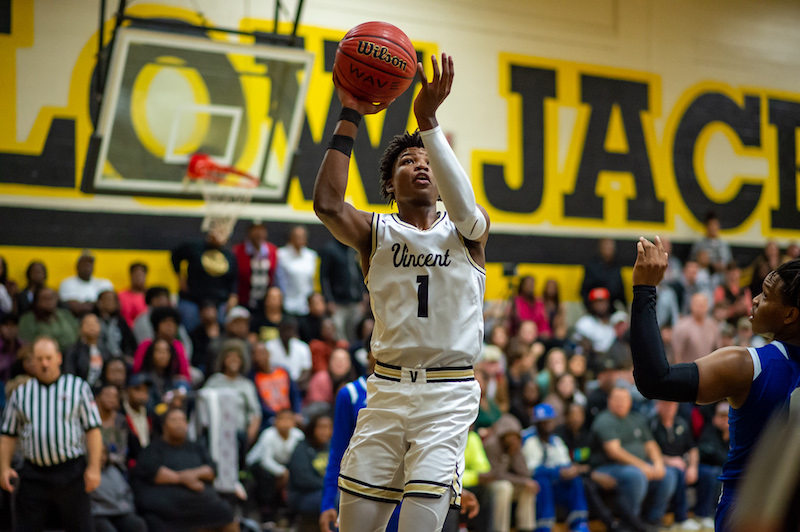 Vincent's Ryshod Keith posted a game-high 31 points behind a 15-18 shooting performance to lead the Yellow Jackets to a 66-40 area win over Sumiton Christian. (For the Reporter/Larry Dancy)

VINCENT – The Vincent Yellow Jackets overcame a slow start against Sumiton Christian on Friday, Jan. 10, to continue their winning ways with a dominant 66-40 area victory.

The Class 2A No. 2 Jackets fell behind 19-11 at the end of the opening period, but as a team, they bounced back to hold Sumiton to five points or less in two of the final three periods, while scoring 15 or more in the final three quarters.

It was a strong rebound for a team that has now won 11 of its last 12 games and improved to 2-0 in area play with the victory.

Vincent actually allowed the Eagles to start the game on a 10-0 run and fell behind 19-5 at one point in the opening frame, but from that point forward, it was all Jackets.

They closed the first quarter out on a 6-0 run and carried that momentum over into the second quarter where they eventually extended that to a 13-1 run to get within two points at 20-18.

They combined that with the ability to share the ball, as they had four assists and just one turnover themselves for a game-best 4.0 assist-turnover ratio.

Trailing 23-18 midway through the second frame, Vincent went on to end the period on a 13-0 run to claim a 31-23 lead at the half, as the Jackets had outscored Sumiton 20-4 in the second quarter.

During the halftime break, the Eagles made some slight adjustments offensively, but at that point, it was almost too late with the way the momentum had shifted in such drastic fashion.

Sumiton couldn’t string together any sort of success until the end of the period, as the Jackets started the third quarter on a 16-3 run to extend the lead to 47-26.

The Eagles eventually closed the quarter on a 9-4 run to cut the deficit to 51-35 heading to the final quarter.

But in the final frame, Vincent reclaimed its strong defensive effort and shut Sumiton down to the tune of five points, while the Jackets scored 15 more to close out a dominant 66-40 victory after trailing by eight points at the end of the opening quarter.

A big reason for that success was the unbelievable efficiency of Ryshod Keith, who finished the game 15-18 from the floor and 1-1 from beyond the arc with 31 points. He also added six rebounds, five assists, two steals and two blocks to his stat line.

Jackson McGinnis also finished in double figures with 15 points, while adding seven rebounds and three blocks. Malik Hamilton posted eight points with a game-high 11 rebounds and three steals. In addition to that, Kaleb Wilson and Tae McGregor had seven and five points, respectively.