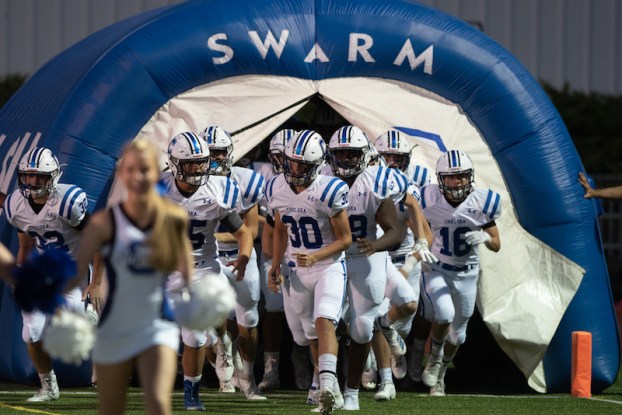 The Chelsea Hornets will have several new challenges on their 2020 football schedule. (File)

The 2020 Chelsea High School football schedule will look slightly different after reclassification moved new teams into Class 6A, Region 5 with the Hornets.

Coming off a 5-6 season in 2019, Chelsea was off to a 4-1 start, before eventually forfeiting a game to Briarwood from earlier in the season and then losing three games in a row by three points or less.

It was a season that could have been more special than it was, but one that saw the Hornets show a lot of improvement and promise under second-year head coach Dustin Goodwin.

Now, they’ll head into the 2020 season looking to take the next step in the right direction and it will start with five familiar opponents in the first six weeks of the season.

Chelsea’s campaign will begin on Friday, Aug. 21, when the Hornets hit the road on opening night to take on rival Oak Mountain. They’ve lost three games in a row to the Eagles and are 1-7 all-time against them, but the two teams are familiar with each other, having met each of the last four years.

That will lead into another familiar home game against Helena on Friday, Aug. 28. Last year, those two teams met in a thriller with first place in the region on the line, before Helena pulled out a 31-28 victory.

This year’s game, however, won’t be a region game with the shift following reclassification, making it the final tune up before the Hornets begin region play a week later.

And on Friday, Sept. 4, the Hornets will kick off region play in a major way—with a huge rivalry showdown against the Briarwood Lions. BCS not only makes the move into Region 5, but is also jumping up from Class 5A.

While the game will be a new one to the region schedule for each, the two teams have met the last six years in a row and 32 times all-time. The Lions have won 22 of those 32 games, including the last three in a row. Last year’s, however, was won 17-14 by Chelsea in the score column before the game was forfeited, adding even more to this year’s rivalry.

Following that second consecutive home game, Chelsea will hit the road to take on Homewood in a region matchup on Friday, Sept. 11. The Patriots remain on the Hornets’ schedule as a region foe despite reclassification.

That will lead into a bye week, before Chelsea travels again on Friday, Sept. 25, to take on rival Pelham. The two teams are no longer in the same region, but the rivalry between the two will still live on for at least the next two years.

Chelsea will then return home for back-to-back home games after that trip to Pelham. On Friday, Oct. 2, the Hornets will host new region foe Woodlawn for homecoming.

Then, after a short week of rest, Chelsea will jump right back into action on its home field when Huffman comes to town on Thursday, Oct. 8, for the Hornets’ only Thursday night game of the 2020 season.

Chelsea has never played Woodlawn or Huffman, which will make that two-week stretch a new endeavor for the Hornets.

That trend will continue into the final two region games against Shades Valley and Mountain Brook over the next two weeks, both of which will take place on the road.

On Friday, Oct. 16, the Hornets will travel to Shades Valley and on Friday, Oct. 23, they’ll travel to Mountain Brook. The game against the Spartans will be interesting, as they have been a strong contender in Class 7A the last two years and will now be competing a classification lower in 6A.

Following the matchup with Mountain Brook, Chelsea will return home for one last familiar opponent on Friday, Oct. 30, against the Calera Eagles. That will mark senior night and the final regular season game of 2020.

By ALEC ETHEREDGE | Sports Editor The Pelham Panthers were a team that started off slow during the 2019 season... read more