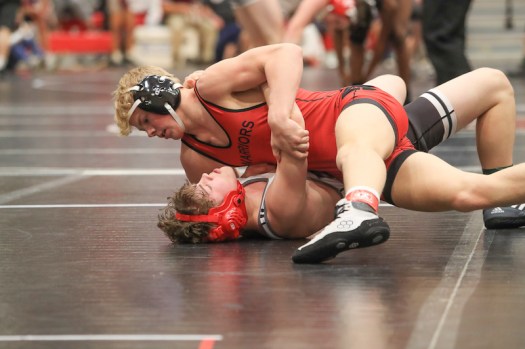 The Thompson Warriors won the 2020 Southeaster Pools tournament on Friday, Jan. 10, while the Oak Mountain Eagles fared well. (For the Reporter/Dawn Harrison) 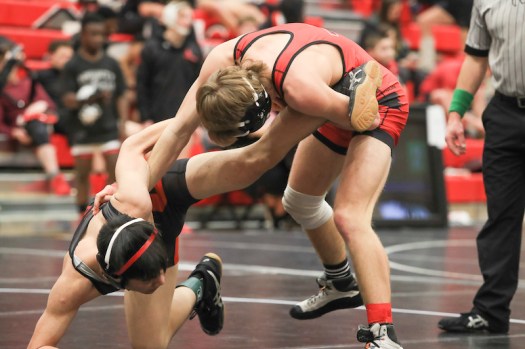 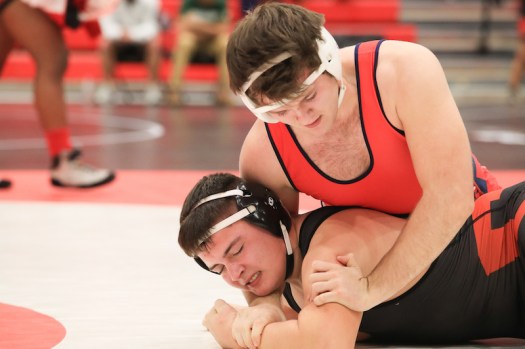 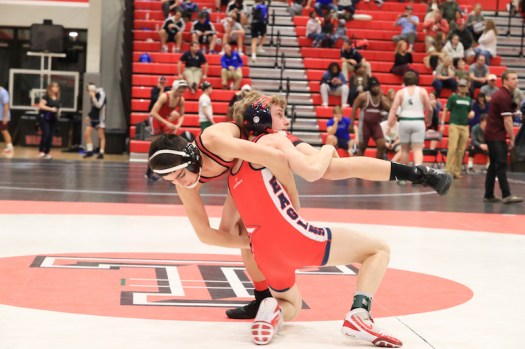 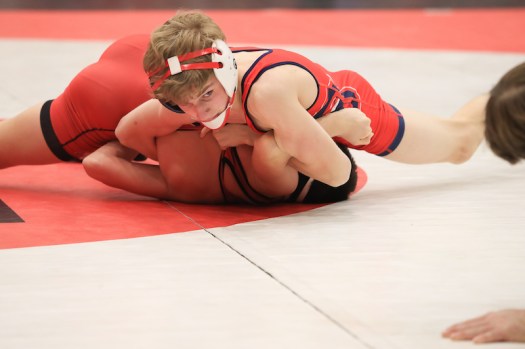 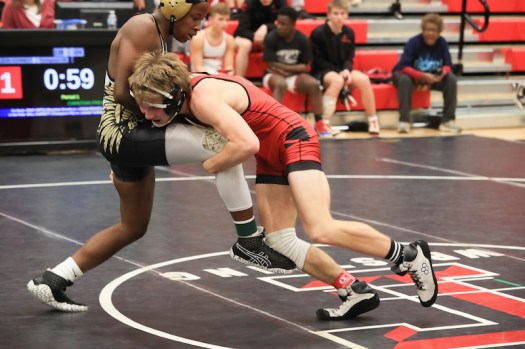 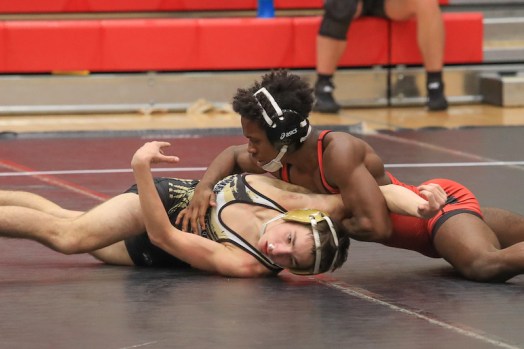 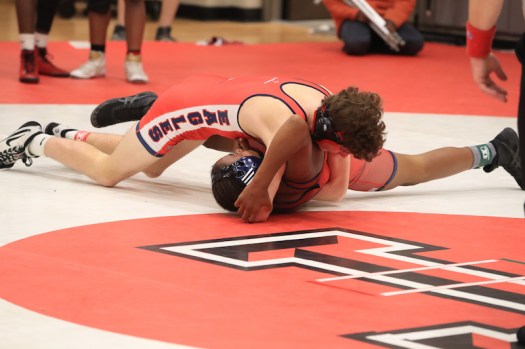 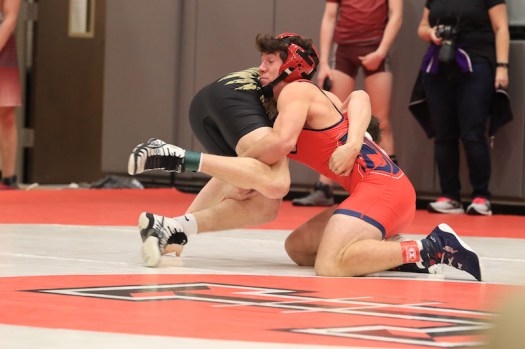 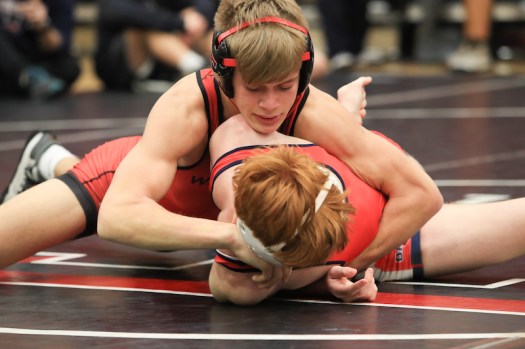 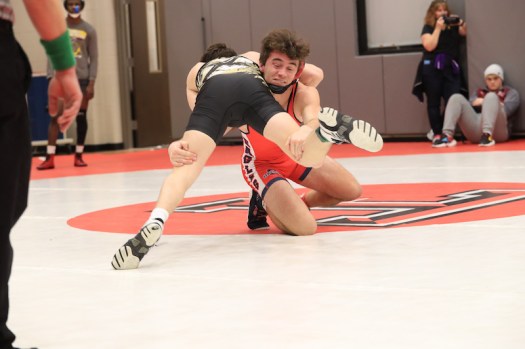 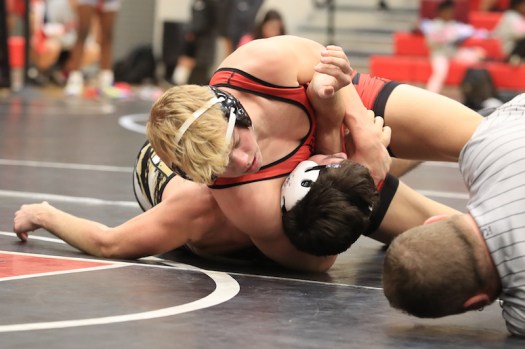 ALABASTER – Thompson High School hosted the Southeastern Pools Tournament on Friday, Jan. 10, and came out with a victory as a team, while the Oak Mountain Eagles put together a top-three finish as one of nine teams competing in the event.

In pools tournaments, wrestlers are assigned a specific set of people to wrestle and at the end of the night the top wrestlers from each poll are taken and put into the winner’s bracket.

Usually these tournaments allow a little room for error with losses, but as the severe weather bore down on Alabama to cancel Saturday’s action, the tournament turned into a double elimination tournament.

This format gave the nine teams a taste of what they will face in just four weeks at sectionals. As the clock neared 10 p.m., 12 Shelby County wrestlers stepped up to face off against the other lone survivors in their respective weight classes.

In the 106 weight class, Camden Tipton of Oak Mountain won by decision over Dalton Zimmerman of Hewitt-Trussville. Tipton controlled his opponent all three periods only allowing his opponent two points to win by a 9-2 decision.

Yanni Vines of Thompson won the 113-pound weigh class with a season against Gardendale’s Isaiah Powe, who had a season record of 31-2 coming in. The two dominant wrestlers were so evenly matched that very few points were scored.

Despite Powe getting the first points of the match with a takedown, he was unable to keep the lead, as Vines was the only scorer in both the second and third period, giving him a decision win of 4-2.

Yet another battle ensued for first in the 126 weight class, as James Latona of Thompson took on Emory Taylor of McCallie (Tennessee) High School. Latona was the first to score, as he took down his opponent in the first period, but before the clock ran down his opponent was able to get an escape.

Latona rallied quickly in the second with an escape and a takedown, giving him a strong lead heading into the third period. Despite an escape by Taylor, it wasn’t enough to declare him the victor, giving Latona a decision win of 5-2.

In the 132 weight class, the Warriors’ Emmanuel Oliver went toe to toe with Kyler Adams of Wetumpka. Oliver came out strong scoring the first points and held his opponent to only four points through the three periods, which gave him a decision win of 10-4.

In the 138 weight class, Sullivan Tipton of Oak Mountain gave Gray Ortis of Mountain Brook a little taste of what he could face at the state tournament in February.

Sullivan took down Ortis in the first period, but Ortis gained an escape. That escape, however, earned Ortis his only points, as Tipton controlled the match putting another five points on the board for a decision win of  7-1.

Will Garrett of Thompson was up next in the 145 weight class to face off against Rand Holtzman of McCallie. Garrett came out of the gate strong and stayed strong the entire six minutes only allowing his opponent two points, which led to a 15-2 major decision win.

In the 152-pound division, Will Miller of Thompson was up against Russ Boackle of Gardendale. Following his teammates’ previous match, Miller controlled his opponent all three periods, racking up a total of 13 points to Boackles four points to grab a major decision win.

Ashunti Perry of Thompson fell to James Whitworth of McCallie via pin in the 165-pound weight class.

In the 170 weight class, the bad luck for the Warriors continued as William Browder of Thompson went into overtime with Gavin Cagle of McCallie. After three periods the score was tied 4-4, but before overtime was done Cagle got a takedown, giving him a sudden victory win over Browder.

The tide turned, however, in the 195-pound matchup, as Micheal Jackson of Thompson pinned Jack Higgins of Mountain Brook in the second period, giving Jackson a fall time of 2:17.

Alex Ward of Thompson was up next against Abe Preston of Wetumpka in the 220 weight class. In yet another six-minute battle, Ward rose as the victor by decision of 7-2, as his opponent was only able to gain two points by takedown in the second period.

The last match in the 285-pound weight class was brief, as James Howard of McCallie pinned Michael Bubel of Thompson in just 1:30 seconds giving Howard a big win.

But at that point, Thompson had done enough to win the overall team title thanks to having a wrestler wrestle for first in close to every weight class.

Results featuring local wrestlers are below:

1st Place – Will Garrett of Thompson

1st Place – Will Miller of Thompson