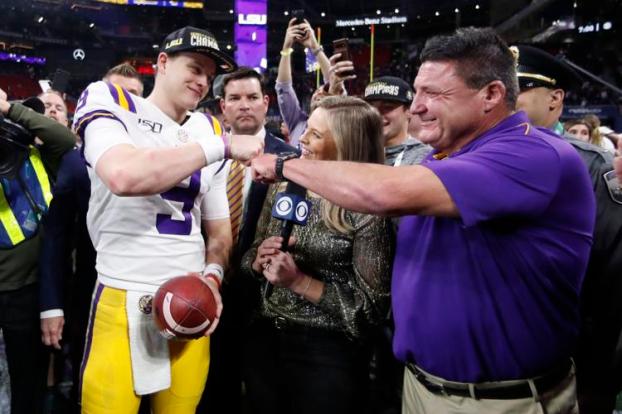 COLUMN: Orgeron, Burrow prove to be successful when given second chances

While the majority of people in Shelby County yell “Roll Tide” or “War Eagle,” there’s something to be said about the two men who helped lead the LSU Tigers to their first national championship since 2007 on Monday, Jan. 13.

No matter the team, everyone enjoys a good comeback story, and both LSU head coach Ed Orgeron and senior Heisman trophy winning quarterback Joe Burrow are prime examples of two people that made the most out of second chances.

For Orgeron, early in his career he faced several problems, mainly as a result of alcohol. While serving as a defensive line coach at Miami in the early 1990s, Orgeron was involved in a bar fight that ultimately led to his arrest and eventual dismissal from Miami.

After cleaning up his act and seeking advice from his father, Orgeron was awarded another chance at coaching with a position at Nicholls State University.

As the years passed, Orgeron began to climb the coaching ranks ladder that eventually led him back to his home state of Louisiana. He was named the head coach of LSU in 2016 and three years later, he led the Tigers to an undefeated season and a national championship.

Like Orgeron, Burrow faced his own adversity. From Athens, Ohio, Burrow’s initial dream was to play for the Ohio State Buckeyes and hopefully lead them to a championship.

Burrow arrived at Ohio State in 2015, but in the two years he spent on the team, he was a backup quarterback that never got to show off his full potential. Understandably disappointed, Burrow elected to transfer from Ohio State and begin a fresh start.

That fresh start was in Baton Rouge, Louisiana where he united with Orgeron. Burrow made the most of his second chance, leading LSU to a 10-3 record and Fiesta Bowl win in 2018 and a College Football Playoff National Championship in 2019.

I bring all this up to say that when we face adversity in life, and an opportunity or door closes, to not be discouraged.

While initially we may be upset, confused or hurt, there could be greater things on the horizon. When faced with a second chance, it’s about how you get back up and respond and both Orgeron and Burrow are prime examples of this.

While LSU may not be the team you root for, we should applaud the resiliency and comeback stories of both Orgeron and Burrow. It’s one reason why sports can be so great.

By PAUL DEMARCO / Columnist Note: This is an opinion column. Based on a recent report, it appears that the... read more