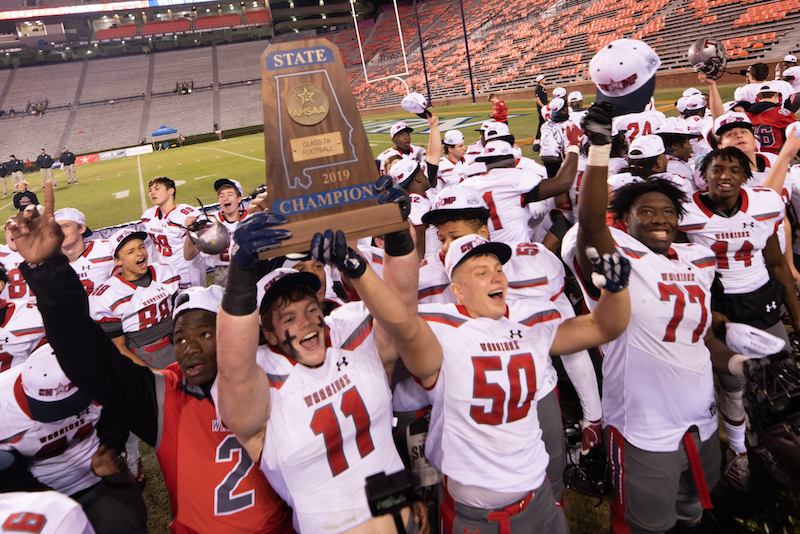 The Thompson Warriors have released their 2020 football schedule, which features an opening game against defending Class 6A champion Oxford. (File)

The Thompson Warriors accomplished everything they wanted to during the 2019 football season after winning their first state championship since 1982 and second in school history, and while there has been time to celebrate, there’s no reason to not look ahead to their chance at repeating.

On Tuesday, Jan. 14, the Warriors released their 2020 football schedule, which not only features the difficult Class 7A, Region 3 slate of games, but a defending state champion to kick off the season.

Thompson will play host to 2019 Class 6A State Champion Oxford on Saturday, Aug. 22, to kick off the new season. The game will pit the defending 7A champ and 6A champ against one another in a matchup featuring two of the state’s best coaches—Thompson’s Mark Freeman and Oxford’s Keith Etheredge.

Both coaches were named Coach of the Year in their respective classification last year, and will now look to kick start their path to repeating with a big win to open their 2020 campaign.

The Warriors finished the 2019 season with a 12-1 overall record, including a perfect 4-0 trek through the Class 7A playoffs, which was capped off by a 40-14 win over Central-Phenix City in the state championship game. Their only loss came by six points to Hewitt-Trussville in the regular-season finale.

The Yellow Jackets also put together a remarkable run to win the Class 6A State Championship game and finished the 2019 season at 14-1 overall. They went 5-0 in the postseason, including a 14-13 win over Spanish Fort in the championship game. They also beat two-time defending state champ Pinson Valley twice during the season by a combined four points to claim the title.

Oddly enough, the last time and only time these two teams met was in the 1982 state championship game where Thompson picked up a 14-11 victory to claim its only other title in school history.

That’s just the beginning of an exciting schedule for the Warriors, who will then travel to take on Sparkman on Friday, Aug. 28.

That will be a tough game on a short week for the Warriors, as Sparkman enters the 2020 season off an 8-3 season that saw the Senators lose to Hoover 21-3 in the first round of the playoffs.

Following those two difficult games in the first two weeks, there will be no break, as Thompson dives straight into region play on Friday, Sept. 4, with a home game against Tuscaloosa County.

The Warriors will then host Mountain Brook on Friday, Sept. 25, in what is no longer a region game after the latest reclassification, before then jumping back into region action on Friday, Oct. 2, with a matchup against Vestavia Hills.

The Warriors will then close out the regular season and region play on Friday, Oct. 23, against rival Hoover. Thompson has won four of the last five games against the Buccaneers, including both of last year’s matchups.

Thompson will then have a bye week during the final week of the season, before a possible playoff appearance.