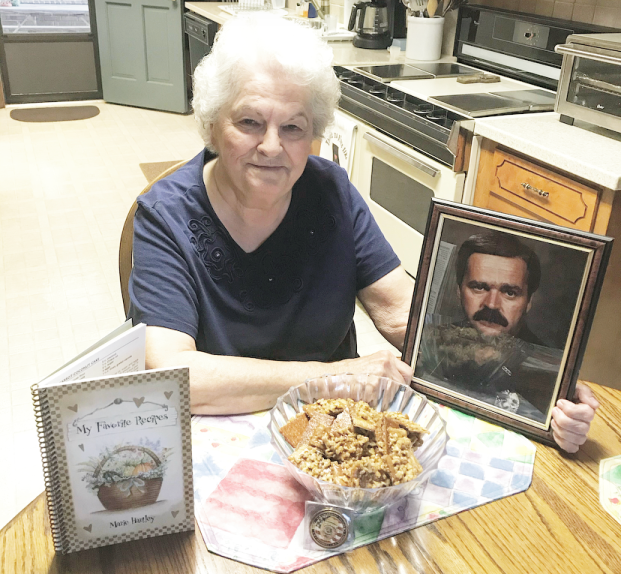 Marie Hartley poses with a portrait of her late brother, “the cookies,” her own cookbook and the Oath of Honor from the Alabaster police chief. (Contributed)

Marie Hartley has lived her entire 81 years in Shelby County.

Born at home in Chelsea, Hartley moved to Columbiana when she was 19 years old.

She and her first husband built a house there and began to raise a family of four children together.

She was widowed after 28 years of marriage, but fate smiled on her a second time when she met and married her second husband, to whom she remained married for 38 years.
As a mother of four, grandmother of 12 and great-grandmother to 17 and counting, Hartley established herself solidly in the community, becoming well-known as a cook.

She even self-published a cookbook with her favorite family recipes, many of which she has given away.

She has also become a well-known supporter of local law enforcement because her brother, Myron Bradley, was a Jefferson County police officer.

She described her beloved brother as a “policeman’s policeman,” the kind of cop others hoped would come as their backup when they called.

When Myron passed away in 2000 from brain cancer, she began baking treats for law enforcement around Shelby County on a regular basis to show her support and appreciation.

She is known for what officers call “The Cookies,” treats so special that officers have been known to wait at the precinct several hours after their shift has ended because they heard Hartley was bringing a batch.

Hartley has cased shopping centers at Christmas, looking for on-duty police officers to give cookies to while they work.

Cookies aren’t the only thing Hartley bakes for the men and women in blue.

A couple of weeks ago, she called the local Columbiana officers and told them to come pick up chicken pot pie if they were hungry.

After years of making them number one, police officers from all over showed up to support her daily when her second husband, Bob, became terminally ill.

Officers from Columbiana and Alabaster would stop by regularly to check on them.

When Bob finally passed, they shared personal contact information with her and promised to be there whenever she needed them.

To this day, it’s only a matter of minutes before they are knocking on her door when she’s had to call for help.

When asked what drives her to feed the local law enforcement, she said she simply wanted to express her gratitude to them for what they do.

Today, Hartley carries in her wallet an Oath of Honor commemorative coin given to her by the Alabaster police chief.

By SASHA JOHNS / Community Columnist Since 1968, babies born at St. Vincent’s hospital in December have had the privilege... read more