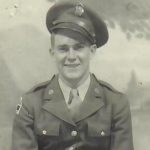 “The American Village is pleased to join the Shelby County Reporter in recognizing Private Ortis Randolph Smith as Veteran of the Week,” American Village Founder and CEO Tom Walker said. “He is representative of the hundreds of thousands of Alabamians who have risked it all for the sake of our country and its freedom. To all veterans we owe a debt we can never fully repay.”

Here are highlights about this week’s Veteran of the Week: Ortis Randolph Smith was born in Tuscaloosa in 1923. He registered for the draft in 1942, and enlisted at Fort McClellan in 1943. He earned the rank of Private First Class, Infantry, in the U.S. Army and served in the European Theatre, Germany during World War II. Private Smith was a POW at Stalag 2A in Neubrandenburg Mecklenberg 53-13, from 1944 to 1945. After being released he returned to the United States and made a home in Bessemer, where he lived until his death in 1981.