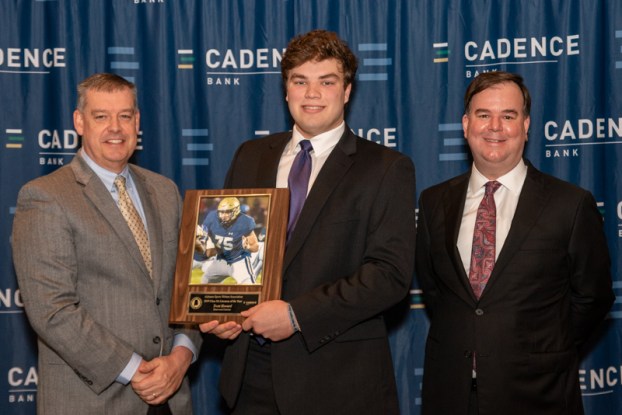 Briarwood’s Trent Howard was named the Class 5A Lineman of the Year at an awards banquet on Wednesday, Jan. 14, in Montgomery. (Reporter photo/Keith McCoy)

On Wednesday, Jan. 15, the 6-foot-4, 285-pound Clemson signee had those words come to fruition when he was named the Class 5A Lineman of the Year after a remarkable senior season for the Lions.

“It was such an honor to just be nominated for this award and in the room with all of these great athletes,” Howard said. “It’s an even greater honor to be selected for it.”

During his senior season, Howard posted 38 pancake blocks, allowed just two quarterback hurries and gave up no sacks. He also anchored a line that totaled 1,906 rushing yards and 29 touchdowns on the ground, and played an integral part in freshman quarterback Chris Vizzina gaining confidence in the backfield.

The Lions also went on to finish 12-2 during Forester’s first season as head coach, and a big reason for that was the presence of Howard. It was a special season that closed out a special career as a three-year starter for the lineman. 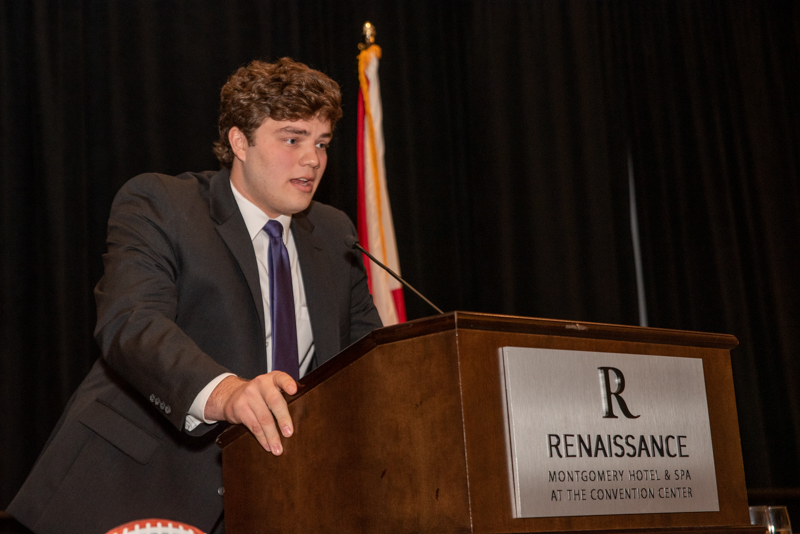 During his time at Briarwood, Howard got the pleasure of being coached by two impressive coaches, one of which is a soon to be Hall of Famer in Fred Yancey.

Yancey was the coach at Briarwood for 29 years, including Howard’s first three years and had a big impact on him.

“Coach Yancey for the first three years meant everything to me,” Howard said. “In my opinion he’s the greatest coach to ever coach the game of football, so to be a part of his legacy that he left means the world to me.”

Yancey, however, announced his retirement from coaching ahead of Howard’s senior year. And while there was a new coach in charge, it was Forester, who had been a player at Briarwood and the defensive coordinator before taking over as head coach.

While Forester spent a lot of time with the defense, Howard was excited to learn under another great coach and help start a new era in Briarwood football.

“To be a part of coach Forester’s start and the legacy he is going to leave is also special,” Howard said. “It’s truly an honor to have been a part of those football teams under two great coaches.”

And during Forester’s first year, Howard put together those remarkable numbers to be named one of the state’s best players. He beat out Pleasant Grove’s Rodney Groce and Corner’s Joshua Myrick to claim the award.

Now, after a special high school career, Howard will make the trek to Clemson University where he’ll join Dabo Swinney and the Tigers looking to continue the dynasty of one of college football’s best current teams.

“It’s always been my dream to play at Clemson,” Howard said. “Being an Alabama kid, you may think it’s Auburn or Alabama, but I’ve been around that program and seen the values they have on and off the field. It means the world to me to get to go up there and be a part of their culture.”

Sawyer Pate named Class 7A Back of the Year