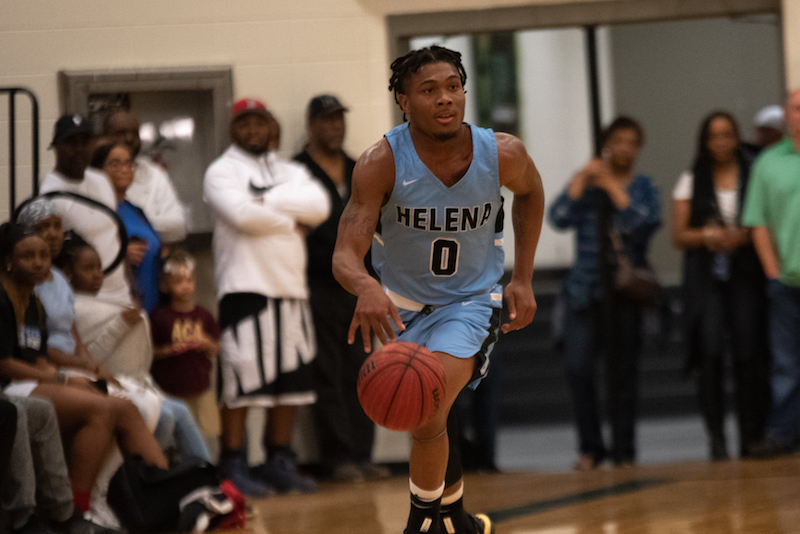 The Helena basketball team got 23 points from Daunte Cave to improve to 3-0 in area play on Tuesday, Jan. 14. (Reporter photo/Keith McCoy)

HELENA – A strong first half from the Helena Huskies led to a fourth win in a row on Tuesday, Jan. 14, as they took down area foe Chelsea 59-38 in front of the home crowd.

The Huskies posted 20 points in the first quarter to double up the Hornets, and let that fuel the rest of the night, as they improved to 3-0 in area play and won their 13th game in the last 14.

A big reason for that early success in the game was the ability to knock down shots from beyond the arc. Helena came out and hit four 3-pointers in the opening quarter for 12 points, while leading scorer Daunte Cave went 4-4 from the free throw line to kick start his night.

Caden Pierce was particularly key in the opening quarter thanks to hitting two 3-pointers and a jumper for eight points in the period.

That strong offensive quarter led to 20 points from the Huskies, while the defense also put together a strong frame. Chelsea got nine points from Jacob Tierney in the period, but beyond that, the Hornets were 1-4 from the free throw line in the quarter, which led to just 10 points as a team and put them 10 points down at the end of the period.

It was the second period, however, that really made a difference in the game and put Helena in front comfortably going into the half. While the Huskies only scored 11 points, six of which came from Cave, they put together their best defensive effort of the night.

As a team, Helena held Chelsea to no field goals and just three free throws in the quarter, which allowed the Huskies to extend their advantage to 31-13 at the half.

It became clear that Chelsea made some adjustments during the break, as the offense came out and put together their best offensive quarter in the third period.

A big reason for that turn on the offensive end of the floor was the success of Andrew Messier and Caleb Moore. Messier posted seven points with three field goals in the quarter, while Moore added six points himself.

Those two helped the Hornets post 15 points in the period, but the problem at that point became Cave.

The senior guard posted 10 points in the quarter, which was enough of a spark for the Huskies to help them outscore Chelsea by one point to take a 47-28 advantage into the final period.

Chelsea was led by nine points from Tierney, all of which came in the opening quarter.