Lawmakers: Prisons, lottery, marijuana among issues to be addressed again 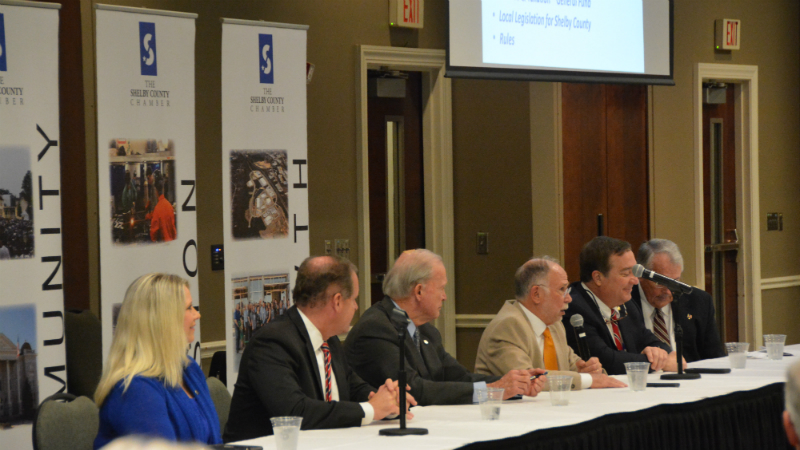 Six state lawmakers who represent Shelby County gave the local business community a preview of the upcoming legislative session at an event hosted by The Shelby County Chamber on Wednesday, Jan. 15, at the Pelham Civic Complex.

Two of those issues will be a state lottery and Alabama’s prison system, Sen. Cam Ward said.

“We will have a long discussion on prisons,” Ward said and added that officials must consider public safety, funding and addressing concerns raised by federal government. “There’s not a lot of easy answers.”

Sen. Jim McClendon added that he has introduced a lottery bill the past three years and is undecided about introducing another one.

“The chances of me getting a lottery bill passed are not very good,” McClendon said.

The representative noted that Alabama residents will vote on a bill that would require the election of members of the Alabama State Board of Education.

Alabama recently ranked 52nd in the country in education, he said.

Sen. Jabo Waggoner said that the Alabama Legislature will introduce, on average, 1,000 pieces of legislation during the upcoming session, which ends in mid-May, and pass an average of 200.

“We are not sent to Montgomery just to pass a whole lot of new laws,” Waggoner said.

“When people are working, they’re paying income tax…they’re paying sales tax,” he said and added that a $5 million windfall for the education budget could mean pay raises for teachers.

Sen. Dan Roberts said he will push a resolution that would declare pornography a public health crisis and also a fix to the state’s tax system that is making Alabama less competitive corporately.

Alabama is one of two states that deducts federal taxes paid before determining the amount due for state income taxes. Because national measures have caused federal taxes to go down, the percentage due to the state has gone up relative to neighbors.

Rep. Arnold Mooney mentioned the problem posed by opioid abuse, a potential bill that would mandate that only U.S. citizens could vote in elections and the need for fiscal responsibility.

“Revenue is not a problem in this state; the problem is what we’re spending the money on,” Mooney said.

Rep. April Weaver asked for attendees to raise their hands if they agreed with certain statements about legalizing marijuana, and said the disparity of responses demonstrated the range of opinions on the issue.

“I expect that the marijuana discussion will be very big this year,” Weaver said.

Mooney called Shelby County “a beacon for the whole state” in terms of cooperation among public officials, but Weaver pointed out that of the 11 senators and representatives that make up the Shelby County delegation, three—Mooney, Ward and Rep. Matt Fridy—are seeking higher offices.

“Going into this session, it’s business as usual, but things could be a lot different for us in 2021,” Weaver said.