Sawyer Pate named Class 7A Back of the Year 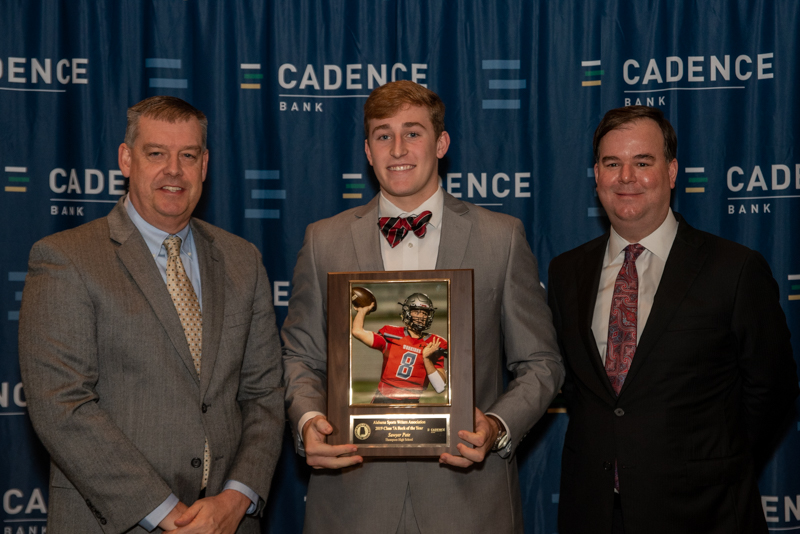 Thompson quarterback Sawyer Pate was named the Class 7A Back of the Year at the Mr. Football awards banquet on Wednesday, Jan. 14. (Reporter photo/Keith McCoy)

MONTGOMERY – After Thompson lost the 2019 Class 7A State Championship game 52-7 to Central-Phenix City and star quarterback Taulia Tagovailoa graduated, not many knew what was next or what to expect.

But behind the scenes, the coaches and players knew something a lot of people across the state didn’t—they had Sawyer Pate.

When Tagovailoa moved to Alabaster from Hawaii, he immediately became the starter for the next two years and set records that will live on at Thompson, but all that did was drive Pate to improve.

The hometown kid that dreamed of leading the Warriors learned from Tagovailoa and worked every day to become the best quarterback he could for his team, coaches and community.

On Wednesday, Jan. 15, after leading Thompson to its second state championship in school history and a 12-1 season, Pate heard his name called to the stage at Montgomery’s Renaissance Hotel as the Class 7A Back of the Year. 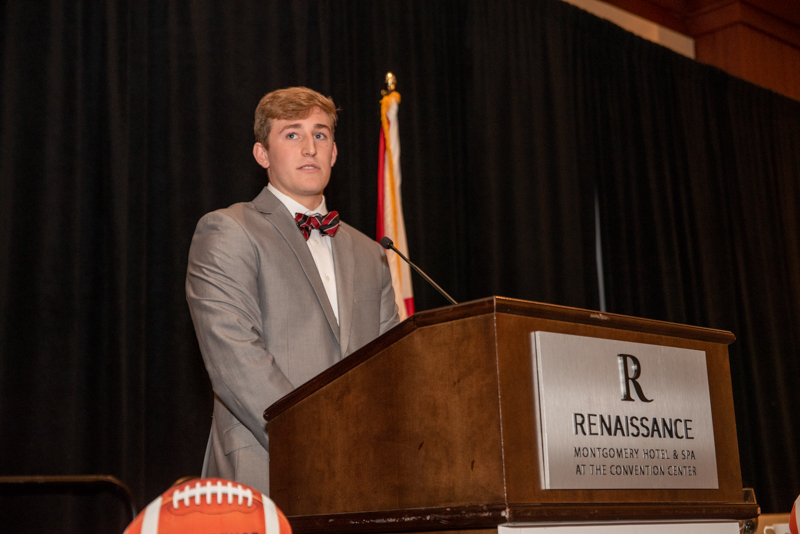 The award made him the best offensive player in the 7A classification and after the Mr. Football voting was released, he was the fifth best player overall in the state during the 2019 season. That’s regardless of classification or position.

“I couldn’t have done any of this without God,” Pate said. “His vision for me, my team and this community. It was just awesome to watch this special season unfold.”

Pate also credited the work he and his teammates put in after losing last year’s state championship game. From the second that lopsided game ended, the team was determined to prove they could do it again and continue the legacy.

“It started after that game we lost after the state championship,” Pate said. “It put a chip on everyone’s shoulder. We had something to prove. We watched others lead the team to success, so it was our time to prove we were the best and get back to where we were.”

And that’s exactly what Pate and the Warriors did. Despite the heavy pressure bearing down on him, Pate stepped up and totaled 3,125 yards and 41 touchdowns during his senior season with just five interceptions. His passing efficiency of 74.5 was remarkable and is the third best mark in state history.

“My work ethic drove me to not just be a better player, but a better person for my team and community this year,” Pate said. “I was just trying to be the best I could be, and I couldn’t have done any of it without my coaches and teammates.”

Pate went on to lead the Warriors back to the state championship game where they got redemption against Central-Phenix City with a dominant 40-14 win. In that game, the senior quarterback threw for 239 yards and two touchdowns through the air on 14-of-22 passing, while also adding two more touchdowns on the ground.

“I’m proud of my teammates,” Pate said. “They put in the time to get us back to the championship game and give us an opportunity. Now, we’re considered one of the best teams in the state.”

To win the award, Pate beat out Florence’s Dee Beckwith and Tuscaloosa County’s Damien Taylor. Taking it a step further, as the fifth best player in the state, he also beat out the three lineman of the year finalists in 7A to be named the best 7A player during the 2020 season.

One of those 7A Lineman of the Year finalists was teammate Jeremiah Alexander.

He was the anchor of the defense and helped that unit come along throughout the year thanks to posting 118 total tackles, 25 tackles for loss and 8.5 sacks.

Those two were two of the six best players in the 7A classification for a reason, and they each have a memory that will now last a lifetime.