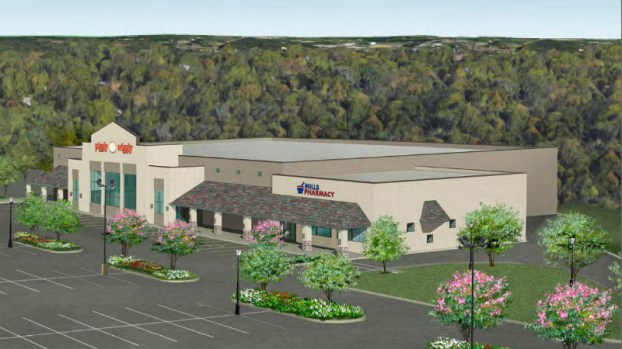 A Piggly Wiggly grocery store will be relocated to the Bluff Park Shopping Center as part of a redevelopment project in the area. (CONTRIBUTED)

HOOVER – On Thursday, Jan. 16, the Hoover City Council approved plans for a redevelopment project in the historic Bluff Park Community.

The project will retain an existing Bluff Park business while revitalizing an area retail center by bringing in new businesses to the high growth neighborhood. The meeting was the culmination of two years of discussion with the mayor’s office, city staff and two Bluff Park businesspeople. City officials see this project as a vital catalyst for continued redevelopment in Bluff Park.

The first half of the project involves Ken Harden, a Hoover resident and businessperson who owns ArmorSafe Storage and Bluff Park Village Shopping Center.

Harden plans to revitalize his existing shopping center, preserve tenants and attract new, unique tenants. He plans to do so by remodeling the exterior of his shopping center and adding community amenities such as interconnecting sidewalks to allow walkability from residential areas.

Harden will also add a community gathering green space to the property.

The second half of the proposal involves Naseem Ajlouny, another Hoover resident and businessperson.

Not only will the store move, but it will also expand in size and services. The newly constructed store will include amenities such as a butcher shop, wine center and hot bar.

The interior design and store offerings will be consistent with one of Ajlouny’s newest stores: the Dunnavant Valley Piggly Wiggly located in Mt Laurel.

The project represents an investment of approximately $9.5 million. The City Council approved a development agreement to support the project, enabling the project to come to fruition.

In addition to improving the city’s sales tax revenue at the location, the enhancements and new store could potentially generate some $25,000 in additional annual property taxes for the city of Hoover, with over $20,000 of that amount going to Hoover City Schools.