Alabaster gets grant to help grow its drug prevention team

ALABASTER – The city of Alabaster has taken a step forward in its effort to tackle drug use among adolescents in the city by hiring Brandon Matthews, lead pastor at Cultivate Church, as the program director of its drug prevention team, Alabaster For Tomorrow. 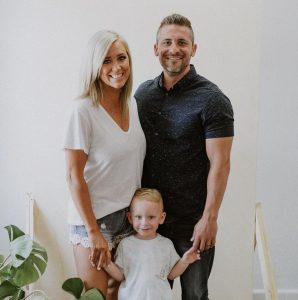 Brandon Matthews with his wife and 3-year-old son. (Contributed)

At an Alabaster City Council meeting on Monday, Jan. 6, a resolution was approved to hire Matthews to serve in the organization’s first and only paid position. The council also approved a resolution to accept the federal government’s Drug-Free Communities Grant in the amount of $125,000 per year for five years. The grant will help fund Matthews’ $55,000 annual salary and other costs associated with the program. Matthews said the grant allows the organization to be self-sustaining and fully operational.

City Administrator Brian Binzer said the federal grant requires an in-kind match by the city, which will be fulfilled by providing Matthews with an office space, needed materials, cellphone service and other necessary items.

Alabaster For Tomorrow was formed in October 2017 after leaders with Compact 2020 approached the city with the idea to create an anti-drug organization specifically tailored to address issues in the city. The group, which Matthews has been a part of since day one, is volunteer-based and is made up of city officials, educators, first responders, business owners, religious leaders, parents and other members of the community.

Matthews said his job as program director is to provide leadership, structure and organization for the group. He will lead efforts to host educational community events, speak at events and lead initiatives aimed at fighting drug use among youth in the city.

In the past three years, the group has already made great strides. It came up with the Family Friendly Vendor Program that asks local businesses to stop selling or relocate certain items that promote unsafe behavior, like marijuana pipes and grinders, fake soda cans used to store contraband, synthetic urine meant to defeat a drug test and any other mind-altering substances that are legal but still dangerous. Alabaster For Tomorrow partnered with Compact 2020 to make the program available to other cities with drug prevention teams.

Most vendors were receptive and agreed to place these items behind the counter, out of the reach of children and teens, according to Matthews. Businesses that agreed to the outlined terms received a decal to display on their window letting customers know they’re a Family Friendly Vendor.

“To me, the coolest thing about that program is that it was a community effort,” Matthews said. “Everyone banded together to do what’s best for the community.”

The group also hosts Parent University forums at Thompson High School that educate parents and caregivers about the latest trends among today’s youth. The next Parent University forum is set for March 3 and will include counselor Joshua Shoemake as the guest speaker. Shoemake will provide parenting tips and discuss vaping and e-cigarettes.

Every year the organization also administers anonymous surveys to Alabaster students across several grade levels to see what students are experiencing when it comes to peer pressure and drug and alcohol use among other things. The information is presented to the Alabaster City Council and is used to guide the direction of Alabaster For Tomorrow.

New this year, in an effort to make information more accessible, Matthews plans to place more focus on posting videos on social media that educate parents about popular drug trends.

He said being a part of the prevention team is so important to him because he has a 3-year-old son who will grow up in Alabaster.

“I want to contribute to the city we live in,” he said. “My son will grow up here and I want to make our city a better place for him. What we do today will make a difference for tomorrow.”

There are a lot of ways to be involved in the group and anyone can be a part of it, Matthews said. Parents and members of the community are also encouraged to reach out to the group for help if they know someone who is struggling with alcohol or substance abuse. The group has access to resources and can offer assistance.

Alabaster For Tomorrow meets on the second Tuesday of every other month from 11 a.m. to noon at Alabaster City Hall. To contact Matthews, send an email to Bmatthews@alabasterfortomorrow.com.