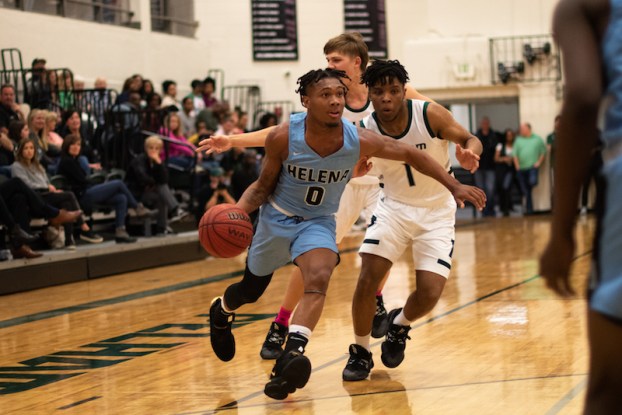 HELENA – The Helena Huskies’ varsity basketball team is now in the driver’s seat of the Class 6A Area 8 standings after holding off a late push from Calera to hold on for a 56-52 win at home on Friday, Jan. 17.

The Huskies were led by Daunte Cave, Caden Pierce and Andrew Fortson as all three players finished in double figures scoring.

Cave led all scorers with 22 points, followed by Pierce with 14 points and Fortson chipped in with 10 points.

Helena controlled the majority of the first three quarters taking a 34-25 lead into halftime but led by just three entering the final quarter.

The Eagles were led by Duke Chambers, who finished the game with 16 points to finish as one of two players in double figures for Calera.

Helena’s lead slipped away in the fourth quarter as Calera took the lead with about three minutes to go in the game, but the Huskies were able to rebound to close the game out at the foul line.

On the opposite side, Calera struggled with opportunities to score at the foul line as they finished just 14 percent shooting converting 2-of-14 attempts.

With the win, Helena improved to 4-0 in area play and has two chances to wrap up the top seed in the area with a home game against Pelham on Jan. 21 and a road game at Chelsea on Jan. 24.

By GRAHAM BROOKS / Staff Writer HELENA – After dropping their first area game of the season on Jan. 14... read more