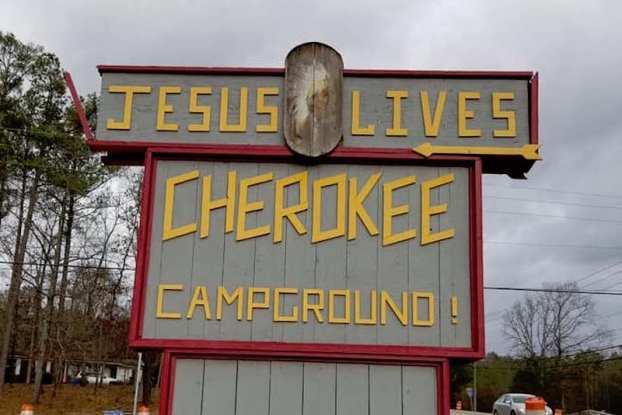 The notable Cherokee Campground “Jesus Lives” sign was taken down to make way for improvements to Morgan Road. (Contributed)

Helena – An expansion project aimed at widening the heavily trafficked Morgan Road (Highway 52) is making progress in its effort to relieve congestion on the route.

The road, which links Helena and Bessemer, has been in dire need of expansion since the population in the area increased more than 20 years ago. Currently more than 18,000 drivers take the route each day, which has caused severe congestion on the two-lane highway.

According to Jefferson County Commission President Jimmie Stephens, the road work crews actually began working on the project roughly four weeks ago and it will take an estimated two years to complete.

The crews are currently preparing roadbeds and moving utilities, according to Stephens. This process involves scraping the roads and removing trees, as well as putting up retaining walls on the sides of the roads.

Under the project, the highway is currently being expanded from two lanes to five, including a middle turning lane, between South Shades Crest road and I-459. This will also include improvements to the intersection at South Shades Crest.

“Convenience and safety,” will be the biggest benefit of the roadwork, Stephens explained. “There will be improved traffic control, improved ingress and egress from all of the connecting roads, and it improves the quality of life of so many citizens who have been inconvenienced by the lack of infrastructure improvement.”

Stephens explained how helpful this project would be for both Jefferson and Shelby counties explaining that many people commute to each county from the other and widening the roads would “help everyone.”

There are plans for a Publix Supermarket to open off of Shades Crest after the work is completed, he said.

At this time the expansion also includes adding extra lanes near the county line, where the Cherokee Campground is located.

Campground administration said that the road work would cause them to take down their notable “Jesus Lives” sign, but that they were looking forward to the road being improved.

“We are hopeful that the turn lane will help with the flow of traffic to the campground and add some extra needed space for the larger campers turning onto 93,” said Rebekah Dupuis from Cherokee Campground.

The expansion project was approved in early 2019 by the Jefferson County Commission, with an estimated cost of $23 million.

By ALEC ETHEREDGE | Sports Editor BIRMINGHAM – As we near the end of the regular season for indoor track and... read more