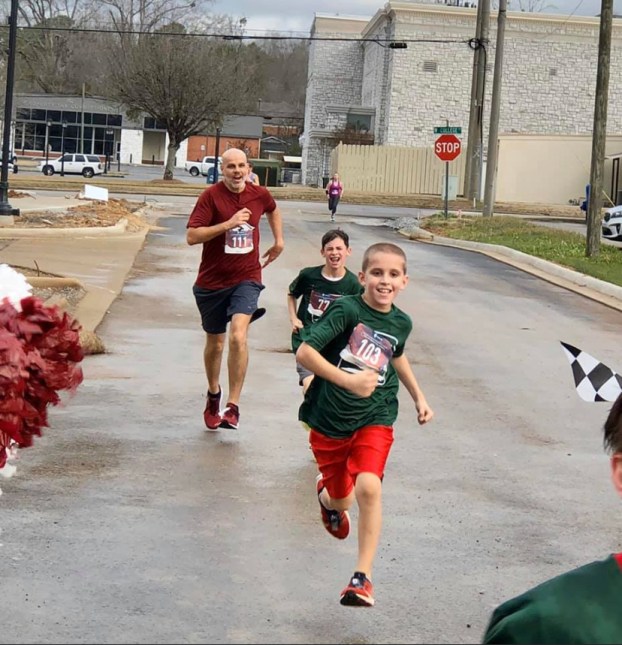 Joel Dixon and his son, with the brother of a newly adopted child, run to the finish line of the Forging Families 5K. (Contributed Photo/Kim White)

“Not a single one backed out. They said they were all in no matter what,” Joel Dixon said of his volunteers for the Forging Families 5K, as severe weather threatened the event he’d been working on for months.
The Forging Families 5K was created from Dixon’s desire to help a family in his church raise funds to adopt their second child.

After watching the Russell family work through the journey of their first adoption, Dixon knew that while he was not called to adopt himself, he was called to assist those that were.
The work wasn’t all on Dixon, though. He told us how many people from all over came together to support this fundraising effort.

The majority of volunteers came from Dixon, and the Russells’ home church, Wilsonville Church of Christ, but families from schools where Dixon had served as principal—and even area Boy Scouts and the local cheerleaders of Columbiana Middle and Shelby County High schools—stepped up to lend a hand.

Businesses all over the community participated by providing door prizes and sponsorships as well.

While his primary goal for the event was to fund the Russells’ adoption, Dixon also had a secondary goal: To bring people to Columbiana.

With that in mind, his first action was to partner with the city. Mayor Stancil Handley and Bruce Andrews with the Shelby County Arts Council worked to provide the 5K with a gathering place and starting point, and the security needed to make sure the route for the race was safe.

“The mayor and his staff were of great assistance right from the beginning,” he said. “I wanted to create an event that would bring people to Columbiana so they could see what a special little town it is.”

And bring folks to town, it did. For its inaugural year, the Forging Families 5K had more than 150 participants.

For the morning of a day fraught with severe weather worries, that is quite a feat.

Between the 5K, the 1-mile fun run and the “sleep-in” registration for participants that just wanted to contribute, the race raised $9,600 of its $10,000 goal, and contributions are still trickling in.
Dixon plans to host the race every year going forward based on this year’s results. It will benefit Sacred Selections, an organization that helps families seeking to open their homes and lives to children needing love.

This is the same organization that the Russell family used to raise money for their adoptions.

“It goes to show that not every family can adopt, but every family can help those that can,” Russell said, adding he was so thankful and could not ask for a better community than the one that has come around him and his family to provide a home for his children.”

To contribute to the cause and help them complete their $10,000 goal, you can reach out to Joel Dixon at the Forging Families 5K and 1-mile fun run Facebook page.