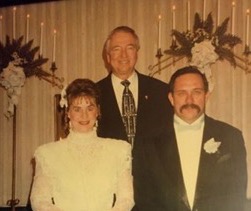 Seventy-year-old Stephen Stamps is a native of Bessemer.

He graduated from McAdory High School, Class of 1969, and retired from his career as a mechanical engineer in 2017.

The following year he was drafted into the United States Army during the Vietnam War. After receiving an honorable discharge, he joined the Alabama National Guard.

Stamps’s tenure ended after he was involved in a helicopter crash. He achieved an E6 Staff Sergeant rank.

Stephen and his wife, Karen, have been involved in a number of community events and organizations during their decade-long tenure as RSVP members.

He has assisted in Yellow Dot events, was an ambassador for the South Shelby Chamber of Commerce and helped serve at the luncheons.

Stephen and Karen have supported the Alabama National Cemetery and volunteered to drive the bus for ALNC events.

Stephen and Karen first met in 1992 and have been married for 23 years.

Karen insists their meeting was a love-at-first-sight experience.

“We’ve made it this far by being honest, communication and being ourselves,” she said. Every year on the couple’s anniversary, they light the very same candle they lit when they got married and hold onto each other’s wedding band and repeat their wedding vows.

They have two sons, three grandsons and one granddaughter.

By DAISY WASHINGTON / Community Columnist “I got my first horse at age 12,” Nancy Davis said. “I can’t remember... read more