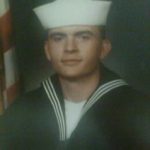 “The American Village is pleased to join the Shelby County Reporter in recognizing Petty Officer (Third Class) Timothy Wayne Turner as Veteran of the Week,” American Village Founder and CEO Tom Walker said. “He is representative of the hundreds of thousands of Alabamians who have risked it all for the sake of our country and its freedom. To all veterans we owe a debt we can never fully repay.”

Timothy Turner was born in Florence, Alabama, in 1977, and grew up in Lauderdale County. In 1996, at the age of 18, he enlisted in the U.S. Navy. He was part of two Persian Gulf deployments, one on the USS Independence (CV-62) and one on the USS Paul F. Foster (DDG-964). After being discharged in June 2000, Turner moved to Birmingham and married Christina Drummond in 2001. In 2008, the couple moved to Sheffield, where their son, Jesse James Turner, was born in 2009. The family currently resides in Tuscumbia.