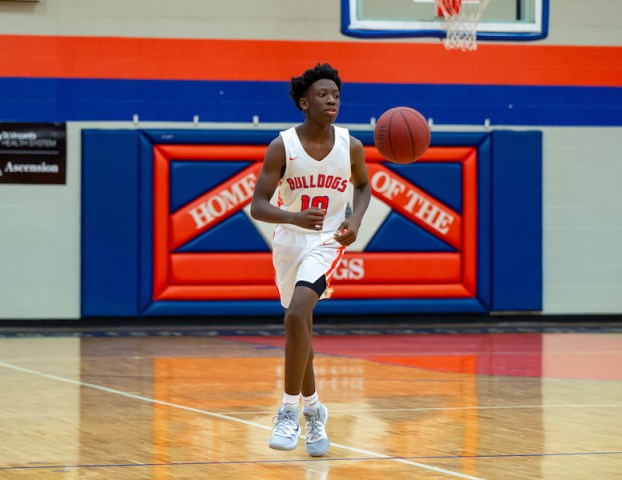 Montevallo's Michael Jones, above, posted 29 points to lead the Bulldogs to an 11th straight win. (For the Reporter/Larry Dancy)

MONTEVALLO – Montevallo sophomore guard Michael Jones has put together a special season, and on Tuesday, Jan. 21, he continued to show we he is one of the best young guards in the state when he led the Bulldogs to an 80-56 win over Westminster at Oak Mountain for their 11th in a row.

Jones scored 29 points and had five assists in the victory as one of three double-figure scorers for Montevallo (18-6, 6-0).

In the opening quarter, his offensive prowess as well as a dominant start from the rest of the team led to 26 points on the offensive end. That became the first of two 20-plus point quarters for the Bulldogs in the game, while Westminster never scored more than 17 in any quarter.

A reason the Knights’ offense couldn’t match the Bulldogs was because of a strong defensive presence that set the tone early in the contest. Montevallo limited Westminster to just 13 points in the opening quarter, which allowed the Bulldogs to take a 13-point lead into the second quarter.

In the second quarter, however, the game took a slight detour in favor of the Knights. They came out with a much better defensive effort, which led to Westminster cutting Montevallo’s points in half from the first quarter to the second.

The Knights also came out and posted 14 points to outscore the Bulldogs, but with the large cushion at the end of the first quarter, they still trailed Montevallo 39-27 heading to the break.

During the half, however, Montevallo head coach Greg Dickinson helped his team make some drastic improvements. While the defense was consistent in the first half, he wanted to see more consistency on the offensive end.

And that’s exactly what he got when the Bulldogs came out and poured in 23 points in the third quarter to take command of the game. They also put together their best defensive effort of the game by holding the Knights to just 12 points, which allowed Montevallo to take a 62-39 lead into the final quarter.

That’s where the consistency became key, as the Bulldogs weren’t content just holding the ball and running the clock, which led to 18 more points in the final quarter.

Westminster put together its best offensive quarter of the game with 17 points, but with Montevallo’s consistent offensive effort, that wasn’t nearly enough to overcome the large deficit.

In addition to Jones’ special night, Montevallo got 13 points and nine rebounds from Jabrian Sullens, while Kial Cottingham, another sophomore, added 10 points and five steals.

Westminster was led by Houston Likens with 19 points, while Sam Bradford added 16.

By ALEC ETHEREDGE | Managing Editor BIRMINGHAM – While many had the day off, several of Shelby County’s best athletes... read more