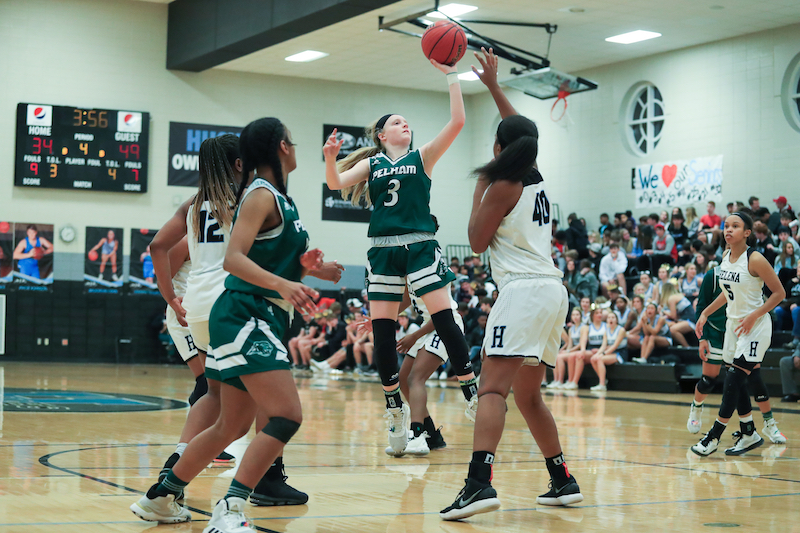 Pelham's Laci Gogan (3) finished with 13 points to help the Panthers defeat Helena 56-43 on Tuesday, Jan. 21. (For the Reporter/Dawn Harrison)

HELENA – After falling to Helena earlier this season, the Pelham Panthers girls’ basketball team is getting hot at the right time and came away with a big road win defeating the Huskies 56-43 on Tuesday, Jan. 21.

Pelham was led by Tamia Nelson who finished with 20 points to lead all scorers as the Panthers took control of the game early and never looked back.

Pelham had at least six players record a basket in the game and helping the Panthers get off to a good start was Laci Gogan, who had five points in the first quarter coupled with Nelson’s six points as the Panthers led 17-12 after one period.

Gogan would finish as the other Panther in double figures with 13 points behind Nelson.

Pelham was able to take a double digit halftime lead thanks to strong play on the defensive end limiting Helena to just six points in the second quarter to take a 31-18 lead.

In the second half, Helena was unable to make up the deficit despite getting 18 points from Brooklyn Oden and 12 points from Alana Scott in the game.

The Huskies were outscored 12-8 in the third quarter and Pelham took a 43-26 advantage into the final quarter.

With the win over Helena, Pelham has now won three straight area games and still have a solid chance of hosting the area tournament depending on how things shake out to end the regular season.