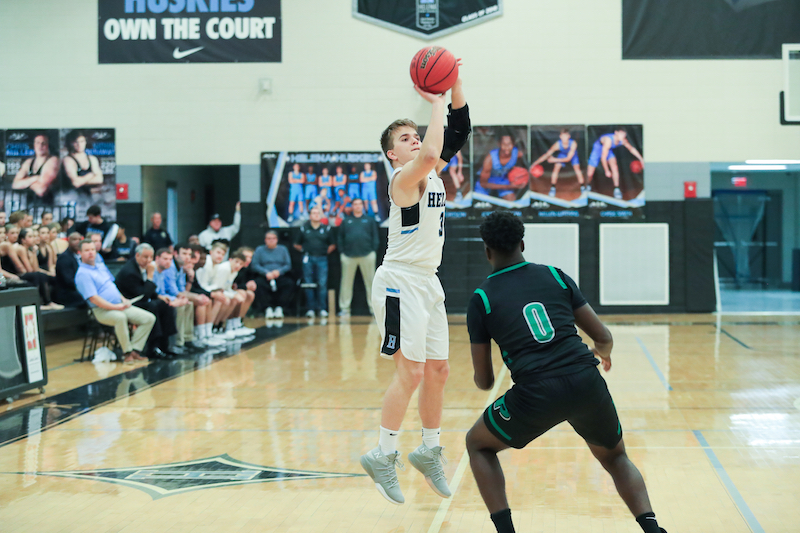 Helena's Caden Pierce (3) joined the 1,000-point club after scoring 10 points against Pelham on Tuesday, Jan. 21. (For the Reporter/Dawn Harrison)

HELENA – It was a special senior night for Helena guard Caden Pierce, who on top of helping his team defeat rival Pelham, became just the fourth Husky in school history to join the 1,000-point club on Tuesday, Jan. 21.

Pierce finished the night with 10 points as the Huskies were never in jeopardy against Pelham, coming away with a 53-35 win to move to 5-0 in area play and lock up the No. 1 seed to host the area tournament.

Pierce said he’s felt the community support from Helena the whole time he’s been a part of the program and it meant a lot to join the 1,000-point club.

“It felt great, all my teammates and all of the community of Helena made it feel really good and I care about it a lot,” Pierce said. “It always feels good to beat Pelham, but we’ve got to look ahead in the future because we play them one more time. Hopefully it’ll be the final time and we end up with a win then go to the area championship and win that.”

Another senior that helped lead the way against Pelham was Daunte Cave, who finished with 13 points to lead all scorers. Cave and Pierce have been the two top scorers all season and one of the main reasons the Huskies are unbeaten in area play.

Helena head coach Billy Grant said the seniors have been a great group to coach and a big reason why the program has been successful.

“They’re some of the best kids I’ve ever coached and just good people and they play hard,” Grant said. “They’ll do whatever they ask you to do and they’re great students and I’m going to miss them. Thank goodness it’s not the last home game because we’ll host the area tournament.”

Defensively, Helena kept Pelham in check all night as the Panthers scored single digits in all but the fourth quarter. Xavier Lankford was the only Panther to finish in double figures with 10 points.