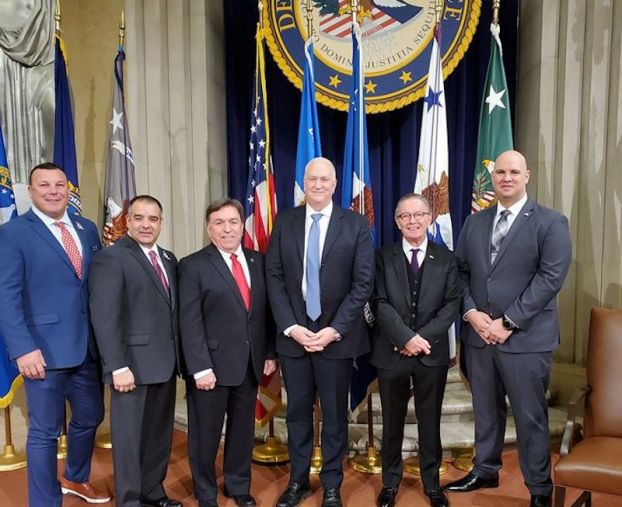 Shelby County Sheriff John Samaniego is sworn in alongside other members of the Presidential Commission on Law Enforcement and the Administration of Justice (Contributed).

BIRMINGHAM — Shelby County Sheriff John Samaniego was appointed to serve as a Commissioner on the Presidential Commission on Law Enforcement and the Administration of Justice, U.S. Attorney Jay E. Town announced Wednesday, Jan. 22. 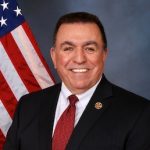 Attorney General William P. Barr announced the establishment of the Commission. On Oct. 28, 2019, President Donald J. Trump signed Executive Order No. 13896, authorizing and designating the Attorney General to create such a commission that would explore modern issues affecting law enforcement that most impact the ability of American policing to reduce crime.

“I am grateful and humbled by the opportunity to serve the interests of our country and our nation’s law enforcement officers,” Samaniego said. “I will work tirelessly to represent Shelby County and the state of Alabama. Most importantly, I will strive to deliver to President Trump, along with my fellow commissioners, recommendations that will better serve our citizens, safeguard liberties, and encourage and support our nation’s law enforcement and their families.”

“This Commission is critical, not only because it is timely, but because law enforcement faces more and greater challenges than ever before,” Town said. “Sheriff John Samaniego is a dedicated public servant with the experience and capacity which will serve the Commission’s purpose well. Not only will the fruits of this effort reduce crime in America, it will reduce the respect deficit towards law enforcement that so deservedly need our support.”

The commissioners, appointed by the Attorney General, are urban police chiefs, state prosecutors, county sheriffs, members of rural law enforcement, federal agents, U.S. attorneys and a state attorney general. In addition to their diverse experiences and backgrounds, each member brings to the Commission an expertise in formulating and shaping law enforcement policy and leading police departments and law enforcement organizations.

The Commission will meet monthly for the next year and then report its findings to the Attorney General, who will submit a final report to President Trump.

Samaniego is currently in his second term as sheriff and has served for more than 40 years in law enforcement.  Prior to serving as sheriff, he served 12 years as the county’s chief deputy. Earlier in his law enforcement career, Samaniego served as the commander of the West Alabama Narcotics Task Force, prior to serving as the Assistant Chief of Police of the Tuscaloosa Police Department.  He is a graduate of the FBI National Academy, the DEA’s Drug Unit Commanders Academy, the U.S. Secret Service Executive Protection School, the FBI National Executive Institute and the National Sheriff’s Institute. Samaniego holds a law degree from the Birmingham School of Law and a Bachelor of Science degree in social work and criminal justice from the University of Alabama.

Samaniego will serve alongside the following:

The year 2020 marks the 150th anniversary of the Department of Justice. Learn more about the history of the agency at Justice.gov/Celebrating150Years.

By GRAHAM BROOKS / Staff Writer HELENA – It was a special senior night for Helena guard Caden Pierce, who... read more