HOOVER – Charlie the bomb dog has been officially discharged from duty at the Hoover Police Department, where he worked since 2013. 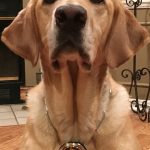 “Charlie served his partner, his department and his city with great distinction” said Officer Brian Hale, HPD spokesman. “He was very good at his job—a true working dog. He was very good-natured, excellent around people and especially around children.”

Charlie, a yellow Labrador retriever, is a veteran of the U.S. Marine Corps. He served at the Marine Corps Air Ground Combat Center in Twentynine Palms, Calif., before being deployed to Afghanistan.

“[Charlie’s] Marine unit in Afghanistan was responsible for conducting combat patrols as well as manning checkpoints,” Hale said. “Charlie indicated on several vehicles while working at a checkpoint, and bomb squad members were able to locate and safely disarm car bombs in each of the vehicles Charlie indicated on.”

Charlie was retired from the USMC at age 5 and sent to Lackland Air Force Base in Texas where the HPD acquired him.

“Often when military working dogs retire from duty but are still healthy and physically able, they are eligible to be adopted by law enforcement,” Hale said.

Hale explained that bomb dogs can also help officers track bomb “precursors” and firearms, and that the department has several different types of dogs.

Charlie in retirement won’t have to adjust to new surroundings since he lived with Officer Scott Prentiss the entire term of his service in Hoover.

“He went everywhere I went,” Prentiss said. “Because I worked night shift patrol, Charlie would come with me every night and ride around the city of Hoover with me in my patrol vehicle. In the event we received some type of call where a bomb dog was needed, or a request from an outside agency needing a bomb dog, we would respond.”

Prentiss said Charlie accompanied him to two training events every month, and the team would do training during the week as well.

Additionally Charlie was a welcomed representative at local schools.

“It didn’t matter if it was one child or a classroom full of kids, he was always happy to get attention!” Hale said. “Officer Prentiss said that Charlie has the unique ability to recognize and understand when a child he is around has special needs. Without having to be told, Charlie just somehow understood that he needed to be gentle, take his time and let the child get comfortable being around him.”

Hale said Charlie was frequently lent to other departments for “prevention sweeps” at special events, such as races in Talladega and football games in Tuscaloosa.

Hale explained that bomb dog retirement is based on several factors, including age and health, and in almost every case, the handler is given opportunity to adopt the animal with whom he worked.

“While we will miss him, he has more than earned the right to retire and live out the rest of his days with Officer Prentiss and his family,” Hale said.