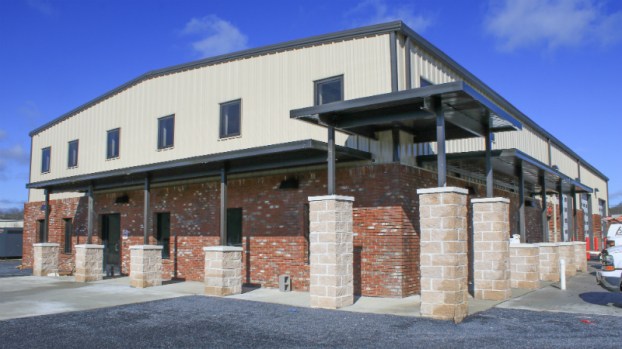 A new fire station in Chelsea off Shelby County 51 near the back entrance to Chelsea Park could open within the next month. (FOR THE REPORTER/DAWN HARRISON)

CHELSEA – Chelsea will soon have a third fire station that will provide enhanced coverage to the eastern part of the city, including the Chelsea Park area.

Station 33 is located off Shelby County 51 near the back entrance to Chelsea Park, whose residents will benefit from the station.

Currently, it takes firefighters and paramedics 10-12 minutes to respond to Chelsea Park from Station 31, Fire Chief Wayne Shirley said, mainly because of traffic on U.S. 280.

From the new station, the response time will be closer to 4 minutes.

A significant reason driving the need for improved response time in the area is Chelsea Park Elementary School, Shirley said, though all Chelsea Park residents will surely be glad to know help is closer.

“It will get help to the people sooner when they need it,” Shirley said. “Seconds mean a lot when somebody is having a heart attack.”

Another way the station should help residents is through improved insurance ratings.

Those ratings are based on the quality and proximity of fire and rescue services. When open, Station 33 will be within a range that causes insurance companies to lower rates, Shirley said.

Initially, the station will be staffed with two firefighters 24 hours a day. The station can accommodate as many as five firefighters, and Shirley said staff will be added as call volume inevitably increases.

“Our call volume down there has already picked up immensely,” he said. “I really don’t think it will be long before we are looking to staff up down there.”

The two firefighters/paramedics will cross-man apparatuses at the site—an engine company and a transport unit, both equipped with advanced life support—meaning they will operate whichever apparatus is needed for a given call.

Backup, if needed, will come from Station 31.

A third bay at Station 33 will house some reserve equipment, while giving the station room to grow.

The station will also house the fire marshal’s office. Tommy King serves in that position for Chelsea and will also be the officer in charge of the station.

Living quarters will be on the second level of the station. Most modern fire stations are one level, and ones that are multiple levels are usually in urban areas and feature a pole for firefighters to slide down from their living quarters when responding to a call.

But Shirley said he did not consider a pole, or stairs, optimal because of the risk of injury to firefighters rushing to respond.

So, Chelsea’s new fire station will be equipped with a slide from the second level to the first.

“It reduces the chance of a misstep,” Shirley said and added that children touring the station would also surely enjoy the slide. “We’re trying to be forward-thinking. I’m excited to see the finished product.”

Station 33 also includes a classroom that can accommodate up to 20 students, both for in-house sessions and possibly for neighboring agencies that need training space.

A dedicated training officer could eventually be headquartered at the station, and the surrounding property could be utilized as an outdoor area.

Construction of Station 33 is behind schedule, but Shirley said the building could be completed within the next month or so.

Shirley said the new station demonstrates the city’s and fire department’s commitment to the well-being of Chelsea residents, and is an example of city services growing along with the population.

“We have to be ready for growth,” Shirley said. “I would put our team up against anybody.”

CHELSEA – In their latest effort to lift the spirits of a classmate hospitalized with severe injuries, Chelsea Park Elementary... read more