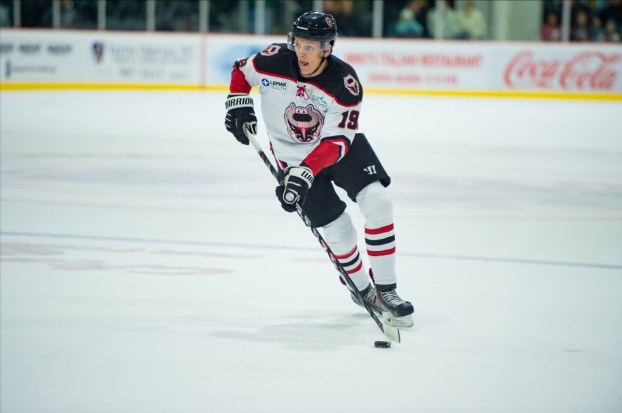 The Birmingham Bulls have won four games in a row and five of six after a slow first half of the 2019-20 season. (Contributed)

Bulls get back to winning ways

After a 7-14-4 start to the season, featuring 18 loss in their first 25 games of the 2019-20 SPHL hockey season, the Birmingham Bulls have gotten back to the winning ways of last year’s team that made a run to the SPHL finals thanks to wins in five of their last six games.

The strong stretch of play started with a weekend split with rival Huntsville on Jan. 17 and 18, losing 3-2 in a shootout and winning 2-1 the next day.

Those strong showings over the fourth-place Havoc seemed to spark the team, as they came out and beat fifth-place Knoxville 4-1 two days later on Monday, Jan. 20, in a special matinee performance on Martin Luther King Jr. Day.

Following that, the Birmingham entered the weekend of Jan. 24 with matchups against third-place Pensacola and another matchup with Huntsville where the Bulls continued their win streak to four in a row. With those two wins, the Bulls are now 12-14-5 on the season with 29 points, which currently has them sitting in seventh in the league and in the necessary top eight to make the postseason.

A recap from both games is below:

The opening game of the weekend featured a little bit of everything for the Bulls, who fell behind 2-0 but were able to come back to win 3-2 in a shootout behind a strong second period, three goals in the shootout and an impressive showing from goaltender Austin Lotz.

In the opening period, the power play became Pensacola’s friend, but one of those power plays was Birmingham’s. Just 2:45 into the game, the Bulls earned a power play off a tripping penalty from Nathan Campbell, but Garrett Milan turned what should have been an advantage for Birmingham into a goal for the Ice Flyers when he picked up a short-handed goal to put his team in front 1-0 in the first 3:23 of the game.

Then, with 11:49 to play in the first period, Pensacola earned a power play off a cross-checking penalty from Taylor Dickin. Mairs Moore made the Bulls pay with a goal off a strong set featuring assists from Tyler Andres and Tommasco Bucci that put the Ice Flyers up 2-0.

That’s how the opening period ended, but Birmingham answered right back in the second period with two goals in the first 10 minutes. It started on a goal from Canon Pieper off assists from Aaron Huffnagle and Cole Stallard 2:03 into the period.

Then, Mike Davis scored off a power play and assists from Josh Harris and Matt Fuller to tie the game at 2-2.

But from there, both goaltenders went into lockdown mode, which led to the final 10 minutes of the second period and the entire third period coming and going with no goals.

That led to overtime, where there still were no goals scored, setting up a shootout to decide the victor.

In the shootout, Pensacola found the back of the net once, but Birmingham found it three times in five shots, including one from Dicking that sealed the deal for the win.

Seven different players finished with points in the win, while Lotz saved 34 of the 36 shots he faced and allowed just one shootout goal in a stellar performance.

In the second game of the weekend, Huntsville scored the first two goals of the game, but it was all Birmingham from there, as the Bulls scored six unanswered goals to pick up a dominant 6-2 victory.

A big reason for that was once again the play of Lotz, who after giving up two early goals for the second game in a row, went into lockdown mode. He went on to face 38 shots for the game and allowed just two goals, while Huntsville’s Mike DeLaVergne faced just 28 shots and gave up six goals.

It was a game that featured its share of penalties between the two rivals, and those played a difference in the first period.

Within the first 30 seconds of the puck dropping, Birmingham picked up its first penalty, which led to a quick power-play goal to put the Havoc in front.

The Bulls earned a power play shortly after looking to answer, but for the second game in a row, they gave up a short-handed goal that allowed the Havoc to instead jump in front 2-0.

It looked like that would be all of the scoring in the first period, but 13 minutes later, Birmingham found itself on another power play. This time, the Bulls capitalized on a goal from Karel Drahorad off assists from Russell Jordan and Cole Golka.

Now down by one, the Bulls got one more look with 31 seconds left in the period after Harris pushed the puck ahead to Jacob Barber, who buried a shot into the back of the net to tie the game 2-2 at the end of the opening period.

That swung all of the momentum into Birmingham’s favor, and the Havoc weren’t able to bounce back.

Birmingham got two more second-period goals from Stallard and Barber. Then, in the third period, Stallard added his second goal, while Barber finished off a hat-trick performance when he scored on a power play with 1:20 to play.

Harris led the team with four points, all off assists, while Barber posted three with his hat-trick night. In addition to those two, Stallard and Drahorad each had two points.

Birmingham will look to continue its streak with upcoming road series against Evansville and Fayetteville in the next two weekends.