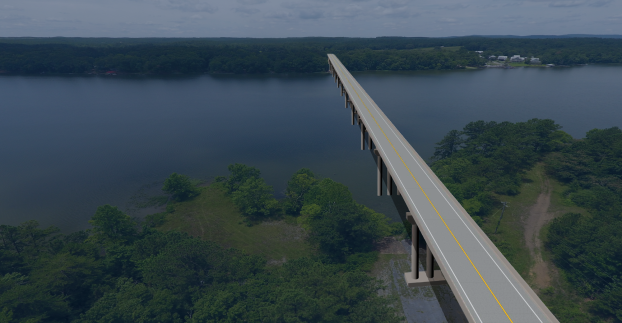 A private developer has proposed a toll bridge that would connect Shelby and Talladega counties. (FILE)

COLUMBIANA – Residents of the Lay Lake area in Shelby County filled the room of the Shelby County Commission meeting on Monday, Jan. 27, to voice their opposition to a proposed toll bridge over the lake.

Several of the residents addressed the Commission with concerns about noise, public safety and property values.

At one point, Commission Chairman Elwyn Bearden asked the standing-room only crowd who opposed the project, and almost everyone raised their hands. No one raised a hand in support of the proposed bridge.

“We love where we live,” resident Patty Cocker said, noting that those in attendance chose their homes because of the peace and beauty of the area. “Would you really want more traffic where you live? Would you want more noise where you live?”

Private developer Tim James has said the toll bridge, called the Coosa River Express, would be 1,600 feet long, with two 12-foot lanes to connect Shelby and Talladega counties at Shelby County 28 on the western side of Lay Lake and Russell Chapel Road on the eastern side.

Tony Miller, chief of the Kingdom Volunteer Fire Department, said at the meeting that he was concerned about public safety agencies being able to handle the increased traffic.

“Shelby County does not have the infrastructure nor the resources to support this bridge,” Miller said.

The Talladega County Commission has approved James’ proposal, but the developer would also need approval from Shelby County.

Residents said they feared Shelby County would vote on the matter without them knowing, but multiple officials assured those present that would not happen.

“If you have a fear of us doing something without you knowing or having a chance to be here, that’s not going to happen in Shelby County,” Bearden said.

Officials said at the meeting on Jan. 27 that before the bridge could become a reality, the proposal would have to be approved by the county’s engineering and legal teams and then presented to the Commission for a vote—none of which has happened yet.

“We’re not close at this point,” Bearden said.

Shelby County Engineer Randy Cole said he expects to receive more detailed information from James’ engineers this week, including traffic projections with an estimated percentage of the traffic that would be heavy trucks.

Shelby County Chief Development Officer Chad Scroggins said that, if the proposal reaches the stage of a decision by the Commission, a public involvement meeting would be held before a vote. Also, feedback would be accepted electronically for those unable to attend that meeting.

Commissioner Kevin Morris, whose district covers the location of the proposed bridge, said he would be a voice for his constituents and that he opposes the bridge.

“I personally am against this bridge; I have been since Day 1 because I know how it affects you,” Morris said and thanked those who attended the meeting. “Your voice is important.”

ALABASTER – On Jan. 19, Maya Mexican Restaurant opened its doors to the Shelby County community offering an array of... read more