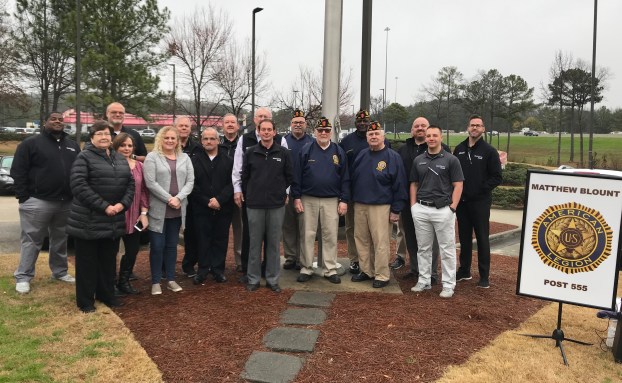 PELHAM – Med Center Mazda in Pelham is flying a brand new American Flag thanks to the help of the American Legion Matthew Blount Post 555 based in Pelham.

Dozens of Med Center Mazda staff and Legion members gathered around the flagpole the morning of Monday, Jan. 27 to witness a special flag replacement ceremony. 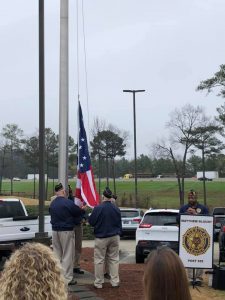 Members of the Post raise the new American Flag.

Despite the heavy traffic the morning of, the ceremony was a success and included the playing of the bugle calls, national anthem and the proper lowering and raising of the American Flag. This marked the first flag replacement ceremony the Triple Nickel Flag team conducted for 2020.

The point of the ceremony was to replace the original torn and tattered flag at Med Center Mazda with a new flag, thanks to the flag replacement program through the American Legion Post 555.

The American Legion Matthew Blount Post 555 Flag Replacement Program exists to allow Post members, friends, neighbors, local schools and businesses that choose to display the U.S. Flag the opportunity to purchase their flags from The American Legion through Post 555. When a school or business contacts Post 555 to conduct a flag replacement ceremony the post will provide the requestor the appropriate sized American-made flag. Every flag that is purchased from the Post is proudly made in the U.S.A. Every flag purchased directly supports programs that give help to America’s youth, veterans and military families.

“We appreciate individuals, schools and businesses for flying the American Flag,” said Commander Kenneth Paschal. “We have a team of veteran volunteers that enjoy promoting patriotism within our community. We can conduct a short seven to 10-minute formal ceremony, implement a short education program for kids, or just come out and replacement the requestor flag with one to two people. Our goal is to meet the needs of the requestor.”

Post 555 does request that a requestor for a new flag make a donation to the post to at least cover the cost of the selected flag provided.

For more information about the American Legion Flag Reward Program, contact the Legion at alpost555.com/flag-program or the flag team coordinator Shuana Hadley at FlagDetail@alpost555.com.

By GRAHAM BROOKS / Staff Writer PELHAM – Business leaders across various sectors in Shelby County made their way to... read more