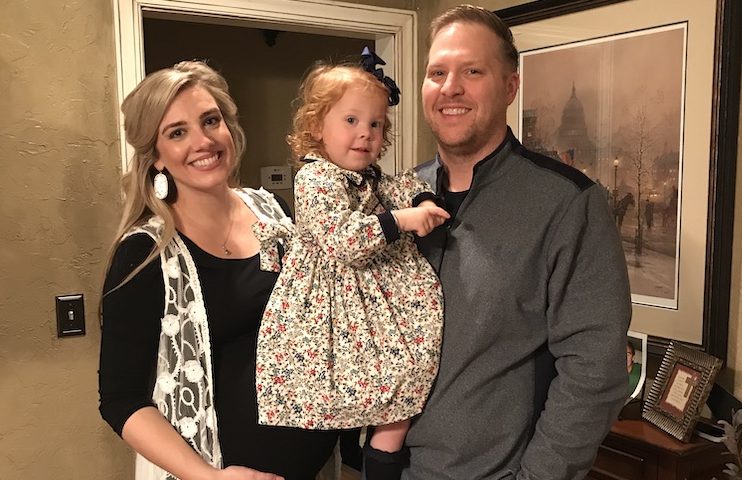 Eric, Natalie and Adalynn Hollis are eagerly awaiting the arrival of triplets due any time. (Contributed)

Pelham Ridge Reading Specialist Natalie Hollis and husband Eric knew there was a possibility of multiple babies in their pregnancy after undergoing fertility treatment. However, when an early ultrasound last September revealed three babies, the couple was nothing short of stunned.

“Honestly, our initial reaction was shock, fear and anxiety with a little bit of excitement mixed in,” Natalie recalled. “I remember looking at the ultrasound screen with my eyes wide and pointing to the third baby asking, ‘What is that?’”

Thanks to previous fertility treatment, the couple already has a two-year-old daughter, Adalynn, but lost her twin during the first trimester of that pregnancy. They know the grief that comes with both infertility and the loss of life, so they quietly waited to announce their secret of a triplet pregnancy until they had safely reached the second trimester.

The Hollis’ wondered how they’d care for three newborns in addition to a toddler and seemingly impossible tasks like everyday grocery shopping, family vacations, financial responsibilities and so forth. But, when pre-term labor became a threat, thoughts turned to merely keeping those babies, one boy and two girls, tucked safely inside of Natalie’s growing belly for as long as possible.

“Things were so smooth with my first pregnancy that I naively expected the same with my second,” Natalie said. “I quickly found out that pregnancy with multiples is no cake walk. I spent the first trimester with intense morning sickness and around 17 weeks, I was admitted to the hospital for a procedure that would hopefully buy us more time. I went home the week after Thanksgiving on bedrest and will likely remain there for the duration of the pregnancy. Thankfully, the procedure has been successful and I’m still carrying the babies at 27 weeks.”

The goal for most pregnancies is 40 weeks, which Natalie’s belly already measures at. For triplets, her Brookwood Hospital team of doctors are hoping for 35 weeks, but realistically know that it could be any time now. Every single day is one more day of developing for the babies and while the Hollis’ have much to do in preparation for the mighty task of raising all these little ones, many things are having to go into the “not so important” category.

Current needs for the couple include diapers, as well as any sick days that teachers would care to donate to continue a paycheck for the Hollis family. Aside from that, the Hollis’ are desperately trying to find an affordable vehicle that will safely transport four car seats. A year ago, a new vehicle would have been doable, but with Natalie on bedrest and financial responsibilities mounting, it’s proving difficult, especially with the likelihood of NICU stays.

Natalie grew up in Pelham, but the family currently resides in Helena. No matter where you live, though, they invite you to pray for them and their growing family. After all, it isn’t every day that you can witness a family’s addition of thirty fingers and thirty toes.