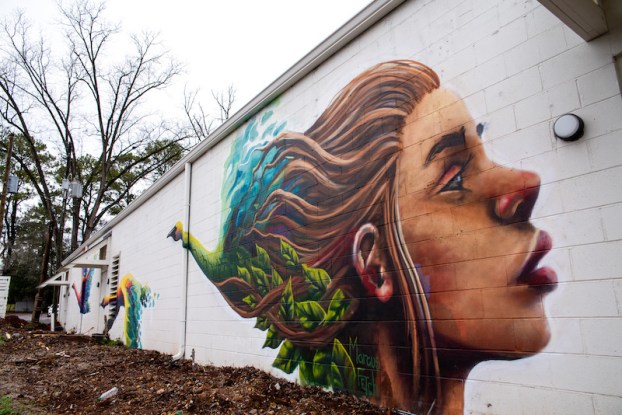 The mural Birmingham artist Marcus Fetch painted on the side of a building on Main Street features a vibrant mixture of colors. (Reporter Photo/Keith McCoy)

Meet the artist behind one of Montevallo’s new murals

MONTEVALLO – A new mural has brought more color to a building near one of Montevallo’s main thoroughfares.

Birmingham artist Marcus Fetch painted the mural on the side of a multi-use space located across from Montevallo Fire Station No. 1 on Main Street.

“It’s a new multi-use space opening soon,” Fetch said. “(Dr.) Bobby Shunnarah is developing that whole bend, and he hired me to bring some life and color to the space.”

Fetch said the mural features a swan flying out of a woman’s head, changing color as it flies down the wall and wraps around the corner to return into her head.

“We wanted a mural that really stood out and was inspiring and colorful, and after a handful of designs, we landed on this one,” Fetch said. “The swan represents one’s imagination and the idea of letting it fly free. In a world where everything around us is constantly demanding our attention, it’s hard to give ourselves space to think and be creative.”

After the month-long design process, Fetch spent two weeks painting the mural, which he said is part of a larger series of work that focuses on visualizing what is going on in people’s minds.

“Painting in Montevallo was awesome,” Fetch said. “So many people kept swinging by and complimenting the mural and being so kind to me. I was really impressed with how much art Montevallo already had, and I felt a really hip vibe from the town, which in turn led me to get more colorful with the mural than I normally would have. I hope over the years the mural makes thousands of people smile, and encourages creativity, imagination and joy.”