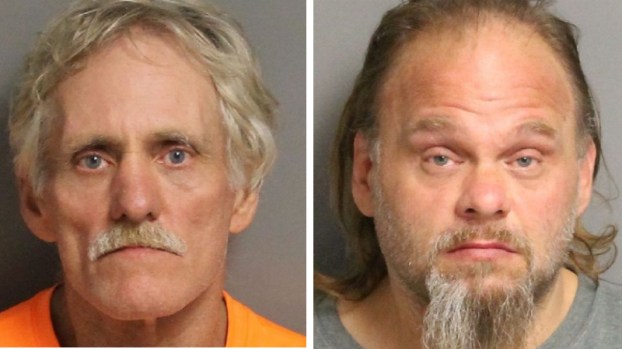 Thomas Lewis Sanford Jr., left, and Michael Shawn Sanford have been charged with six counts each of unlawful breaking and entering of a motor vehicle. (CONTRIBUTED)

HOOVER – Two brothers are in police custody after being charged with breaking into several vehicles parked outside businesses off Riverchase Parkway.

The suspects allegedly forced entry into the vehicles and stole tools and other equipment.

Detectives obtained surveillance footage of the suspects, and they were identified by other officers who recognized them from past encounters, HPD said.

Further investigation revealed the suspects sold several of the tools and other items to a pawn shop and a scrap metal dealer.

Thomas Lewis Sanford Jr., 58, and Michael Shawn Sanford, 44, both of Birmingham, are each charged with six counts of unlawful breaking and entering of a motor vehicle.

The suspects were arrested by Hoover police on Thursday, Jan. 30, in the 5000 Block of Kiska Avenue in Birmingham and transported to the Hoover City Jail, to be transferred to the Shelby County Jail later on Jan. 30.

Traffic lights to be installed at dangerous Chelsea intersection

CHELSEA – Chelsea’s most dangerous intersection will soon see the addition of traffic lights. Traffic signals will be installed at... read more