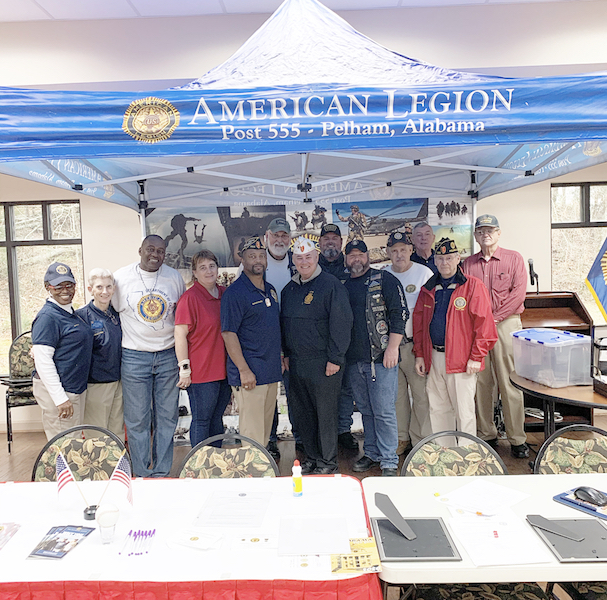 Members of American Legion Post 555 gather at an open house the organization hosted for local veterans on Feb. 1. (For the Reporter/Sasha Johns)

By SASHA JOHNS / Special to the Reporter

The men and women of local American Legion posts want to reframe what they fear may be a negative perception of what their organization does.

In order to accomplish this goal, Pelham’s Legion Post 555, hosted a two-day event at the Senior Center in Pelham that invited posts from all over the county and beyond to join together and revitalize the work that the American Legion does for veterans and their families in our communities.

The two-part event took place on Jan. 31 and Feb. 1. On the first day, members came together from all over Shelby County to listen to speakers and network on what they are doing—and what else they can do—to reach out to the unsupported brotherhood to make their lives better.

They held a successful membership drive to benefit those in the area who have served by making what they call “Buddy Checks,” or phone calls to members that may not have joined the local active members to build relationships.

Pelham Post 555 Commander Kenneth Paschal said there are an estimated 400,000 veterans in the state of Alabama. Of that number, only 15 percent are involved in support communities like the American Legion.

The organization’s goal is to reach out to veterans and their families and help them find a community and support in order to combat the unfortunately high rate of suicide among veterans.
“Alabama is in the top 10 for loss,” Paschal said. “If they get involved with us, they have a better chance.”

During the second day of the event, we visited Post 555’s open house and learned about several of the services and organizations that are available to serve with and support local veterans through the American Legion.
Representatives from Veterans Affairs, Mobile Vet Centers, Alabama National Cemetery Administration, My HealthVet, Veterans Service Office, VA Educational Benefits, Voter Registration, American Legion Auxiliary, Riders, Sons of American Legion and more were on hand to help anyone who walked in the door.

Jeff Monday, director of the American Legion Riders, talked about their particular function within the Legion.

“I consider us to be the missionaries of the post,” he said. “We are out in the community raising funds for the disabled and the deceased, so they will have a legacy.”

Monday and his brothers in arms also raise funds for other local organizations that benefit the community, as well as escort military flights carrying servicemen and women home and protect funerals of fallen soldiers.

Vashone Smith, a 16-year veteran and three-year American Legion member, summed up the work of the organization: “No matter what you’ve heard about the American Legion, we are all about family. We have vets in the streets young and old that are struggling, and we want to be mindful of them and help them. We are all about getting to the next level when it comes to helping them and their families.”

How is the Valley Elementary School project progressing in Pelham?

By GRAHAM BROOKS / Staff Writer PELHAM – The building that housed Valley Elementary School in Pelham is transforming from... read more