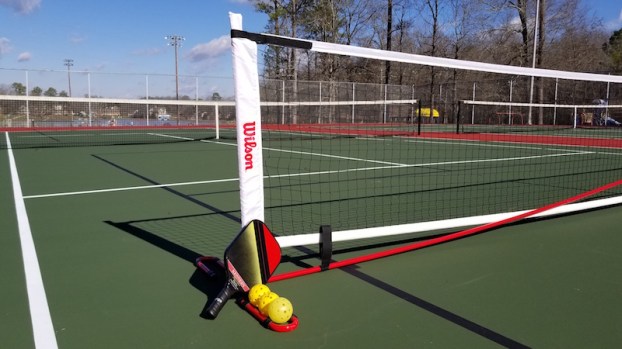 Helena residents will have an opportunity to learn about and play Pickleball at the Joe Tucker Park tennis courts. (Contributed)

Helena – Pickleball is a dynamic sport for people of all ages and skill levels that incorporates elements of tennis, badminton and ping-pong. Residents of Helena now have an opportunity to participate in the activity thanks to the Helena Pickleball Club.

Tracy Elliott, founder of the club, is partnering with Rhino Pickleball to hold three clinics on Feb. 9 at Joe Tucker park for newcomers and enthusiasts of one of the fastest growing sports in the United States.

The clinics will be led by Ryan “The Rhino” Sheffield, and will feature two sessions for beginners or newcomers to the sport, and one session for intermediately skilled players. There will also be an exhibition match featuring skilled players, followed by open play for anyone who wants to participate.

Admission for the clinics is $15 and the first session will begin at 10 a.m. and the events will run through the end of open play at 7 p.m. that night. There will also be a raffle for a prize worth $40 during the clinics.

Elliott partnered with Rhino to hold the clinics in an effort to garner attention for the sport and to try and expand interest in the community.

“I started the club and we’re hosting this clinic because I wanted to bring Pickleball to this area,” Elliott explained. “There are not any sports geared toward adults and I wanted to bring a sport adults to participate in to the city.”

The club was founded in late 2019, and has since started having sessions on the tennis courts at Joe Tucker park. Elliot also explained that the club has partnered with Blake Matthews of CrossFit Furious to have a second location for the sport.

Matthews plans to have two new courts at his location and will offer memberships to players to provide an indoor location for fans of the sport.

Those interested in the clinic can register the day of at Joe Tucker Park or ahead of time at Insidepickleball.com/rhino

Residents of Helena or from the surrounding areas interested in participating in the Helena Pickleball Club can contact Tracy Elliot at tracyelliott1@gmail.com or by texting 482-2324 for more information.

By ALEC ETHEREDGE | Managing Editor HELENA – This year’s senior class for the Helena football team was one of... read more