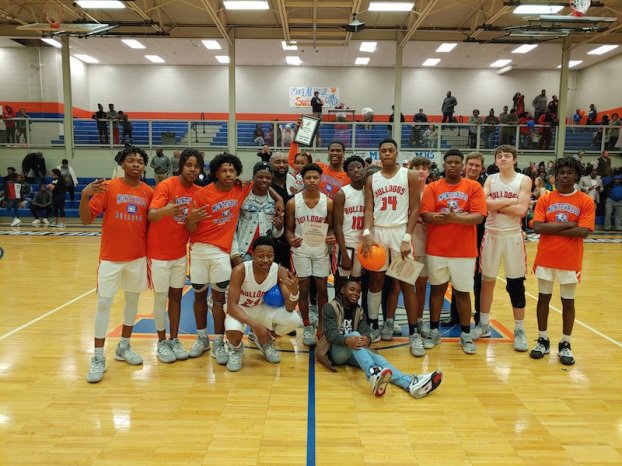 Montevallo claimed the Class 4A, Area 8 title with a dominant win over Childersburg on Friday, Feb. 7. (Contributed)

MONTEVALLO – Despite a slow start on Friday, Feb. 7, the Montevallo Bulldogs did what they’ve done so well for the last two months in the Class 4A, Area 8 tournament—win basketball games.

After falling behind 19-11 at the end of the first quarter, Montevallo didn’t allow more than 12 points to Childersburg the rest of the way, while the offense went on to score at least 16 points in the final three quarters to pick up a 65-47 win and the area crown.

The Bulldogs swept the five-team area during the regular season as part of their winning streak, and have now swept the area tournament to claim a championship ahead of the sub-regional round of the playoffs.

A big reason for that shift was the second quarter Michael Jones and Jabrian Sullens put together offensively.

Jones had five in the first quarter, while Sullens was held scoreless, but in the second period, the two combined for 14 of Montevallo’s 18 points.

Defensively, after giving up 19 points to five players in the first quarter, the Bulldogs cut that more than in half by allowing just six points on one field goal and four free throws in the second quarter.

That allowed Montevallo to completely erase the eight-point deficit to take a 29-25 lead into the half.

With that shift in momentum, the Bulldogs entered the second half confident on both ends of the floor. They took advantage of that, and held the Tigers to just 10 points, while the offense put up 16 more points thanks to strong play from Kavounte Britton, Chase Ramsey and Dylan Campbell.

With that, Montevallo extended the lead double digits at 45-35 heading to the final quarter.

And the Bulldogs saved the best for last.

In the fourth period, they got two 3-pointers from Jones and at least three points from Britton, Kial Cottingham and Campbell, while the team hit four of five free throws in the period as well.

That balanced and efficient quarter led to 20 points, as Montevallo closed out the 65-47 victory with ease.

For the game, the Bulldogs finished 11-16 from the line. Jamarius Carter also played a key role in the win with eight points and a strong 15 rebounds, including four on the offensive end. Sullens and Jones combined for eight steals in the win as well.

Montevallo will now take on Handley in the sub-regional round of the playoffs at home on Tuesday, Feb. 11.

By ALEC ETHEREDGE | Managing Editor HELENA – After being upset by the Pelham Panthers in a 60-58 game back... read more