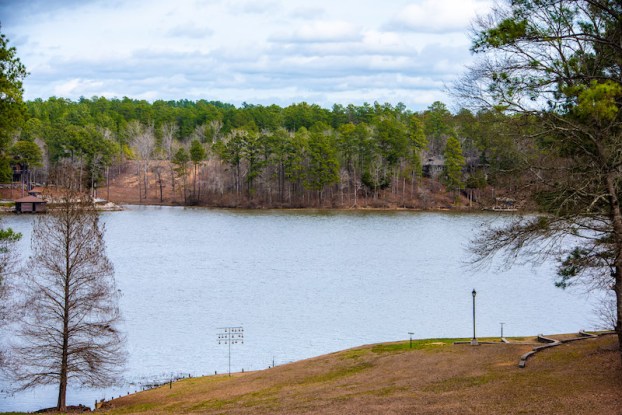 A proposed toll bridge that would stretch over Lay Lake and connect Shelby and Talladega counties has garnered public feedback over the last few weeks. (Reporter Photo/Keith McCoy)

COLUMBIANA – A proposed toll bridge that would stretch over Lay Lake on the Coosa River system was the subject of several public comments during a Columbiana City Council meeting on Feb. 4.

The proposed project, which private developer Tim James has referred to as the Coosa River Express, has elicited much feedback from local residents in the last few weeks as information about the project continues to circulate.

The proposed toll bridge would connect Shelby and Talladega counties, at Shelby County 28 at Perkins Landing on the Shelby County side of the river. According to James, the bridge would measure 1,600 feet long, 43 feet wide and consist of two 12-foot lanes with 8-foot shoulders on each side.

“Please remember it’s coming through our back yard,” Kenderdine said. “People are not going to want to live on a truck route.”

Perkins Landing resident Aubri McClendon said the results of a petition shared electronically and door-to-door this month revealed a majority of the subdivision’s residents are opposed to the proposed bridge.

Mayor Stancil Handley said the City Council has not made a decision regarding its stance on the project.

“I think this is something that has pros and cons,” Handley said. “I hope people will arm themselves with information.”

A public involvement meeting about the proposed toll bridge will be held on Tuesday, Feb. 18, from 5-8 p.m. at the Shelby County Arts Center’s Grande Hall multi-purpose venue, located at 105 West College Street in Columbiana.

Information will be available about the proposed bridge and road improvements, along with route illustrations and traffic projections.

Attendees will have an opportunity to complete and submit public comment forms at the meeting. Comments also can be sent through the online comments form at ProposedTollBridge.shelbyal.com.

Attendees may come to the meeting at any point in the three-hour time frame.

Documents provided by the developer should be available online at ShelbyAL.com/DocumentCenter/Index/318 on Feb. 7, according to a press release from Shelby County.

In other business, the council reviewed and approved architectural plans for two properties, one located at 405 West College Street (former site of a skating rink), and the other located at 102 Shelby County 47 South (Howard Tire Service property).