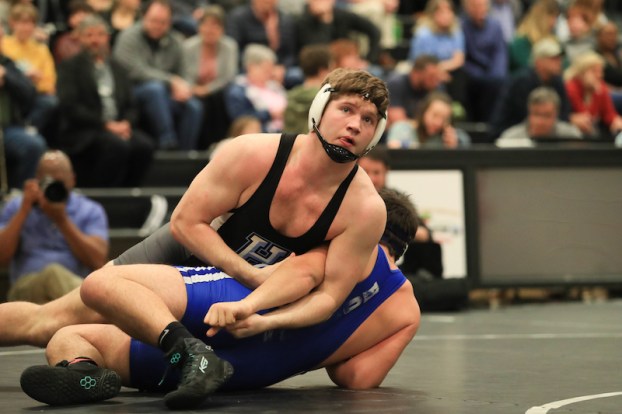 The county qualified 30 wrestlers between 1A and 6A at the South Super Section tournament. (For the Reporter/Dawn Harrison)

With the Hornets qualifying so many wrestlers, they’ll get to compete for a team title after proving to be a strong contender for a title.

In the 106-pound weight class, Hunter Ingram was able to advance for the Hornets after winning his first-round match by a 9-5 decision. He then lost to Sandlin Pike of Benjamin Russell, but bounced back to win his next match, which locked him up as a top-eight finisher in the weight class to qualify.

Also in the 106-pound division, Levi McGrew of Helena and Walter Calvert of Pelham were able to qualify. Just like Ingram, both won their opening match, lost their second and then won their third in clutch fashion to advance. McGrew’s two wins came via pin, while Calvert won with a tech fall and a pin.

In the 113-pound division, Seth McGrew of Helena and Bear Maxwell of Chelsea both advanced to state. McGrew took advantage of a bye in the first round, and then won a decision in the quarterfinal matchup to lock up his spot, before then losing in the semifinals.

Maxwell took care of his first match with a pin, and while he lost the second one in a tight 8-7 decision, he bounced back to win the important one with a pin over Evan Lassitter of Robertsdale to clinch a spot at state.

While Chelsea’s Collin Burroughs added another qualifier for the Hornets in the 120-pound weight class, Montevallo and Shelby County also qualified their first wrestlers.

Burroughs won his first match with a pin, then lost his second, by like so many others, he was able to bounce back with a pin in the decisive match to qualify.

Gavin Monk of Montevallo received a bye in the first round and then won with a pin in the second round before losing via pin in the third. He then took down Carson Stinson of W.S. Neal in the consolation match with a pin to advance.

Shelby County’s Caleb Mooney also received a bye in the first round, then won via pin in the second and via medical forfeit in the third. In the semifinal match, he lost in a tech fall, but had already done enough to advance to state.

Michael Moran was the biggest highlight in the 126-pound weight class with three consecutive wins to guarantee a second-place finish. He won with a bye, pin and tech fall.

Chelsea’s Adam Byerman also advanced in the weight class after getting a bye in the first round and winning a 12-3 major decision in the second. He lost a tough sudden victory match in the semifinals, but still advanced.

Jamari Harris of Montevallo qualified in the weight class after a strong showing as well. After a bye in the first round, he won three straight, all via pin to guarantee himself at least second place and a spot at state.

Shelby County’s Cole Sykes put together a similar performance in the 132-pound weight class. After a bye, he won three in a row with a tech fall, pin and major decision to guarantee himself second place and a spot in the state tourney.

Pelham’s Bryce Wanagat and Chelsea’s Casey Stewartd advanced in the weight class in Class 6A behind 2-1 records after winning their first match, losing their second and then winning the decisive third.

In the 138-pound division, Helena’s Justi Yunke was the only wrestler to advance, and he did so in dominant fashion. Yunke used a bye in the first round before then picking up three pins in a row to secure at least a second-place finish and a spot at state.

Seth Branham of Pelham was the only wrestler to advance in the 145-pound weight class after a strong showing as well. After a bye, he won two matches in a row via decision to lock up at least second and a spot in the state tourney.

Antonio Allums made it three weight classes in a row with just one wrestler advancing, as the 152-pound wrestler won his first match via major decision, lost his second in a pin and won his third with a 7-1 decision.

Chelsea’s Preston Royster got the Hornets back on the board in the 160-pound division with a bye and a pin to lock up a spot in the semifinals of the section tourney, while also advancing to state.

He’ll be joined by Helena’s Matthew McFall, who won his first and third matches with pins to advance in the weight class.

In the 170-pound weight class, Connor Mims won both his first round and quarterfinal match with a pin to advance to the semifinals and lock up a spot at state.

Pelham’s Jake Ingram also advanced in the weight class with a decision win and a pin sandwhiched around a loss to Gulf Shores’ John Paul Uter.

Chelsea and Pelham both also saw wrestlers advance in the 182-pound division. Alexander Perry advanced for the Panthers with a 2-1 record, while Kalob Johnstone posted the same record to advance for Chelsea.

In the 195-pound weight class, Rankin Allen gave Montevallo another wrestler to advance with three consecutive wins via pins, before losing in the semifinals.

Chelsea’s Elliot Gage also advanced after receiving a bye and picking up a pin in the quarterfinals.

Another strong performance from Helena’s Nathan Dunaway gave the Huskies their final wrestler to advance. Wrestling in the 220-pound weight class, Dunaway got a bye and picked up two pins to guarantee himself at least second in the division.

Chelsea’s Robert Montgomery also advanced thanks to a pin in the consolation match.

After losing his first match, Khalidi bounced back to win two tight decision wins to advance to state.

Dennis won his first three matches, two via pin, to advance, while Stogner finished with an impressive record of 3-1 thanks to two pins and one decision victory.

By ALEC ETHEREDGE | Managing Editor HELENA – After being upset by the Pelham Panthers in a 60-58 game back... read more