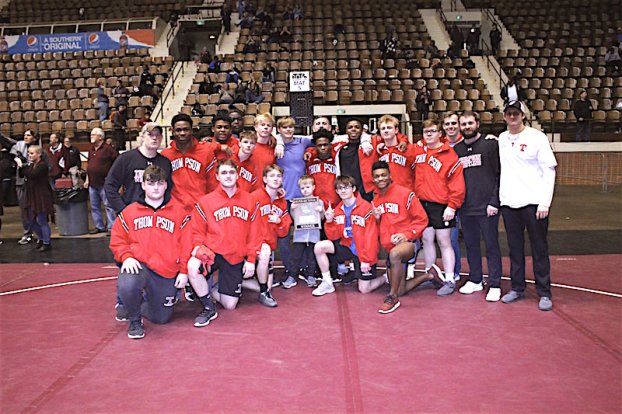 The Thompson Warriors continued their path to three-peating as Class 7A wrestling state champions after dominating the South Super Sectional tournament in Montgomery Friday, Feb. 7, through Saturday, Feb. 8.

The Warriors posted a total score of 284.5, which beat second-place Hoover by more than 100 points, while they also qualified wrestlers for the state tournament in 13 of the 14 weight classes.

Also competing in the sectional with Thompson was Oak Mountain. The Eagles put together a strong third-place showing with 167.5 points and qualified wrestlers in eight of the 14 weight classes.

Spain Park, who was competing in the North Super Sectional, also had a strong showing and took home fifth with 119.5 points. The Jags qualified wrestlers in six different weight classes.

Needing to finish in the top four of each weight class to qualify for state, it was an impressive showing from the three schools to qualify a combined 27 wrestlers for the 7A state tournament.

The excitement from the three teams started out in the 106-pound weight class when Thompson’s Blaise Albarado and Camden Tipton both advanced to the championship match.

Albarado ended up claiming the title with a pin, but both wrestlers had already locked up a spot in the state tourney.

All three teams sent someone in the 113-pound weight class. Thompson’s Yanni Vines gave the Warriors another winner behind two pins and a major decision win, while Spain Park’s John Robert Thompson picked up a win in the North Sectional with a pin, a major decision win and a decision win. Kirk Smitherman of Oak Mountain finished fourth behind a 2-2 record.

In the next three weight classes, Thompson was the only team to have a qualifier thanks to Cory Jones (120), James Latona (126) and Emmanuel Oliver (132) putting together strong performances. Latona and Oliver both continued strong seasons with wins, while Jones finished third.

In the 138-pound weight class, Oak Mountain’s Sullivan Tipton won three matches in a row with pins to claim first, including a win over Thompson’s Wilson Kennedy, who finished fourth in the division to also advance.

All three again qualified a wrestler in the 145-pound weight class with Thompson’s Will Garrett winning the division in the South Sectional behind two pins and a 7-5 decision win, while Jackson Mitchell of Spain Park and Cole Burrough of Oak Mountain finished fourth in their respective sectional.

Will Miller of Thompson qualified in the 152-pound division after picking up wins via two pins and one decision.

Thompson picked up another first-place finisher in the 160-pound weight class from Ashunti Perry, who won with three pins and one tech fall, while Oak Mountain’s Caden Avans finished third in the division to advance.

William Browder picked up the Warriors’ eighth win of the sectional tournament in the 170-pound weight class thanks to two pins and one major decision win, while Spain Park’s Trent Thompson also advanced with a finish of third.

In the 195-pound division, Michael Jackson of Thompson picked up another win, while Spain Park’s Gage Hughes and Oak Mountain’s Jacob Payne each finished third.

In the final weight class, Spain Park’s Jaxon “Pablo” Bast added one final winner when he picked up four consecutive pins in a row to claim the top spot.