As rain moved through Shelby County on Monday, Feb. 10, the area was put under a flash flood warning, and it didn’t take long for flooding to take over many roadways.

With the combined saturated ground from rain during the previous week and the storm system moving almost due east to west, the bulk of the rain held over the Shelby County area for the entire day Monday leading to the drastic rainfall totals.

It was a storm that at times spanned eight states, including Alabama, Arkansas, Georgia, Louisiana, North Carolina, South Carolina and Tennessee.

The Cahaba River, which runs across the northern portion of the Shelby-Jefferson county line also had an alert for a minor flooding issue following the torrential rain, as it rose to the top of its river banks.

In the southeast portion of the county, the Coosa River also had the same issue running through the Shelby County and Talladega County line where the river reached as high as 405 feet.

The flooding issues across the county came less than a week after an EF-2 tornado went through the western part of Shelby County near Helena, causing some minor damage to homes as well as knocking down and splitting several trees. 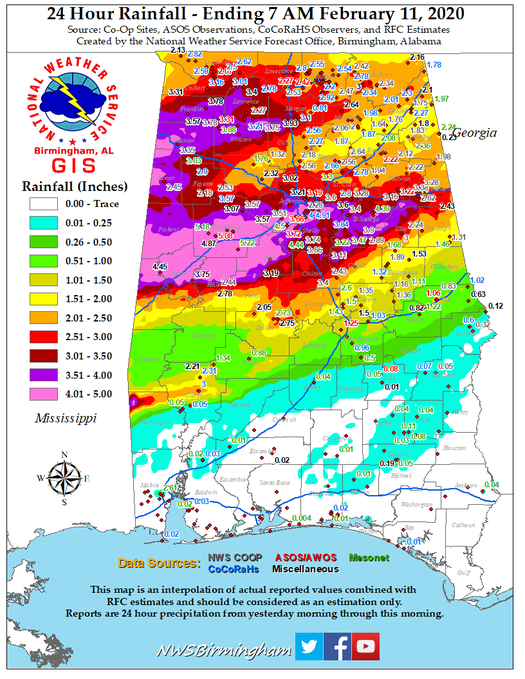 With flooding the issue this time around, several schools delayed opening by two hours on Tuesday, Feb. 12, while roads and even neighborhoods were under water.

Holland Lakes in Pelham saw flooding trap people from getting through a heavily flooded area, while Cahaba Valley Road in North Shelby near both Lake Purdy and Briarwood Christian was shut down from water pouring over the roadway. County Road 13 in Helena also saw heavy flooding and was shut down on the morning of Feb. 12.

Other parts of the state and even some small areas of Shelby County have received upwards of 5 inches of rain in the last 24 hours.

While the rain ended for the majority of the day Tuesday, severe storms and more rain are expected to move through the area during the overnight hours of Wednesday, Feb. 12.

By GRAHAM BROOKS / Staff Writer PELHAM – Business leaders across various sectors in Shelby County made their way to... read more